After getting a pretty great brunch the day before, for Day 9 we figured we should check out a place across the street called Paris Café. Not only that, but we had a parking ticket that was good until Monday morning so we figured we needed to maximize those 200 ISK and get the most for our Krona. With a sandwich at Subway costing basically the same as 2-3 of them in Canada, it only made sense. (Possibly because of Poland). They had a similar brunch and we both got the same. It was actually even better than what we had at the Laundromat Café which was surprising because of how good it was over there. 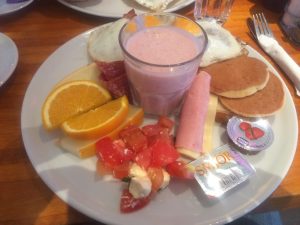 After brunch we headed out to Gullfoss, which is a much larger waterfall than we had seen before and something we really should have gone to when we stopped in at Þingvellir earlier in the trip since it was on the way, but we hadn’t figured it all out at that point I guess. Also along the way was a place called Geysir, which apparently is actually the source of the word ‘geyser’ in English. It is a 210-ft tall geyser that is sporadically active and so we did not get to see it, however there are a number of smaller geysers in the area that we were able to see. 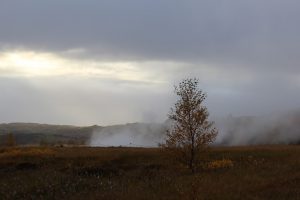 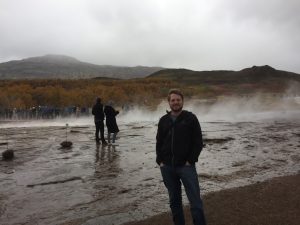 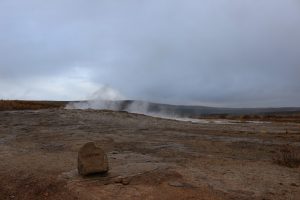 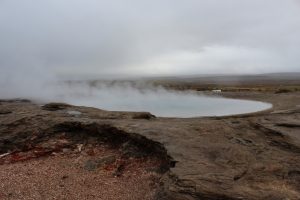 Following that we finally got to Gullfoss and it was a sight to see, on the same level as Niagara Falls sans the American-style commercialization. The one thing Iceland seems pretty keen on doing is keeping you off their nature, with ropes at just about any place we went and strict rules regarding where you can and cannot go, including off-roading being illegal. There are plenty of ‘roads’ and trails to traverse, but you best be staying on them. 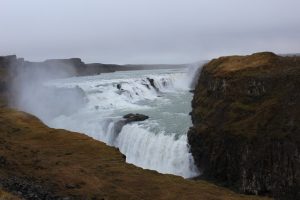 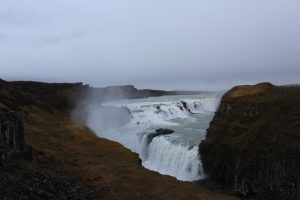 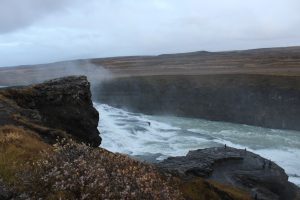 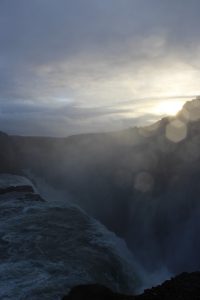 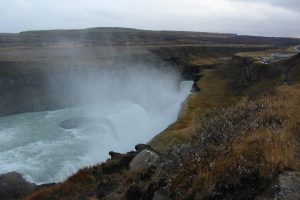 Following our visit to Gullfoss, we called and made reservations at Steikhúsið again so that Ron could try the recommended minke whale steak and so that I could get another beef steak. Ron’s “surf ‘n turf” option was meant to include a horse-meat steak as well, but they were all out, so he got beef instead. The whale steak was surprisingly similar to beef in many regards and not very seafoody at all, especially considering the previous minke we had that was very similar to salmon. Too bad, I have never eaten horse before, but if it was handed to me, I would definitely give it a go, it is apparently quite good. We also had some fried langoustine fritters which were an unexpected delight to start the meal. 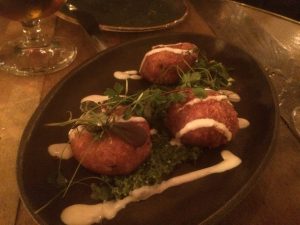 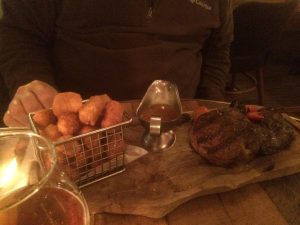 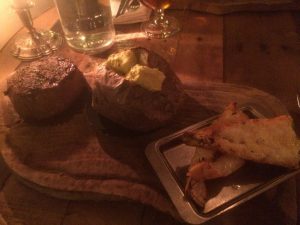 After stopping at the hotel bar for the last night we’d be spending in Iceland, I ordered the exact same drink I had the previous time we had been there only to be told they didn’t have mint at this bar. Odd, since I had mint last time, but I assumed they were just out. The drink isn’t quite the same sans mint, but it was good enough I suppose.
We had planned on doing a few things on our last day, but after checking in to the flight the previous night I realized we actually were going to be leaving earlier than I thought and so we cut a few of them out. We stopped in at the Paris Café for some brunch and a burger and then grabbed a few last souvenirs before heading over to the airport to return the car. I never mentioned it earlier, but Iceland: paint some yellow lines on the roads. I loved a lot about driving in Iceland, but seriously, there is no difference in lane markings for a one-way road and a two-way road that allows passing. It’s very disconcerting when you’re turning onto a road and aren’t 100% sure if it’s a one way and you’re going the wrong way down it. There are various other signs and markings to indicate, but it’s still off-putting nonetheless, especially if you missed that one sign back there and aren’t quite certain.
Once we got to the airport I grabbed my third (and favourite I think) hotdog in the terminal and we sat around waiting for our boarding time. At what seemed like a relatively reasonable time we walked over to our terminal only to be greeted by a non-moving line of people waiting to get through passport control. Turns out not everyone in Iceland is super happy with their job and they were on strike so they only had 3 people working the gates. Well, we actually got through quicker than we thought (and ate a few of the chocolates they were handing out to keep people happy – it didn’t really work on the upset man standing behind us). The flight home was relatively uneventful though it did actually feel much shorter and on the cherry on top was that I managed to get some of the Islenska Hamborgarafabrikkan mini burgers since they weren’t sold out this time! I was super pumped, but they actually aren’t that great when they’re heated up on an airplane. The sandwich I got on the way here was better for sure, plus my TV worked on the way here, I had to look at the one on the seat next to me this time. 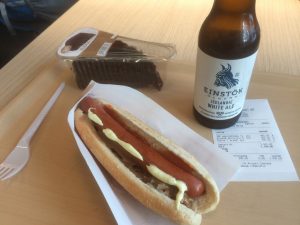 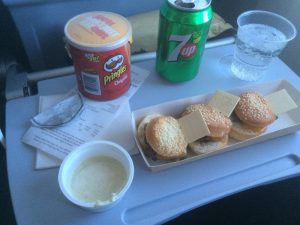 We left Iceland at 4:45PM and arrived in Edmonton at 5:20PM, which was cool and meant that it was daylight the entire time (instead of night time the entire time like last time), and I was able to see the oceans and other arctic areas like the completely snow-covered mountains of Greenland. 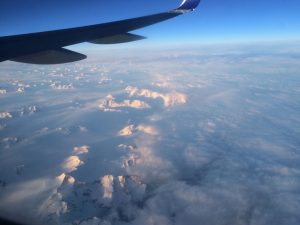 What a trip! Iceland was amazing and I look forward to going back to see some parts of the country I didn’t get to this time. Perhaps circumnavigate the island in an expedition-prepped Land Cruiser? Perhaps.