The unfortunate thing today really was the rain. It’s been basically on the verge of raining the entire time we’ve been here so far, which hasn’t been bad but not great either. No chance of seeing the Northern Lights with this much cloud, even though I check for stars every night. Today though, the water wasn’t helping when I wanted to photograph the waterfalls we went to visit, especially the first one. Luckily I managed to get some decent shots while protecting the camera, hand-held of course since I still don’t have a tripod and don’t know if I’ll even buy one here anymore. Depends what where we decide to go I suppose. Tripod isn’t much good on a boat or ATV!

After waking up late (again), we drove out to Seljalandsfoss, which I’ve seen in photos a few times before coming to Iceland and so I had some idea of what to expect, though most people don’t mention or photograph much the other smaller falls beside the main one I actually found them to be pretty interesting as well. One of the coolest things about this set of falls is that you can actually get in behind them (any only get somewhat wet). 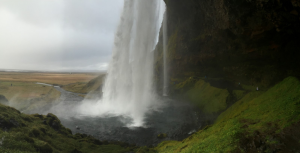 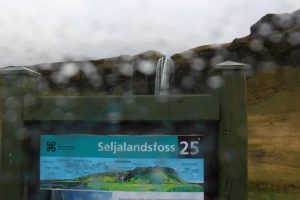 The weather cooperated a bit better in time for us hitting the next set of large falls we were looking for, and along the way we say about 10-15 other small falls as well as some caves and cool shacks built right into the side of rock. The main attraction of the day for was Skógafoss for sure though. We hiked up to the top of it and got pretty close at the bottom. Ron was absolutely soaked by the time we left. The sun came out for a bit too and offered us opportunities to see many rainbows, even after we left the falls and were driving back. Some of the fullest both ends to the ground goodness I’ve ever seen. 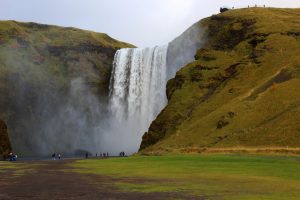 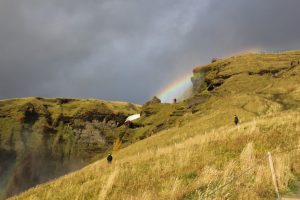 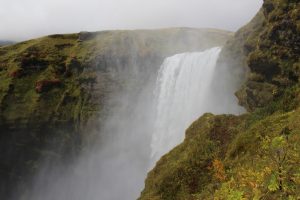 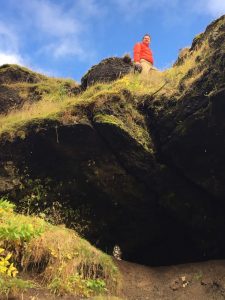 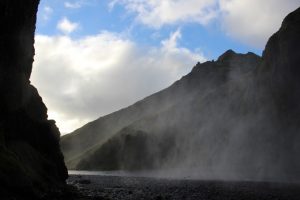 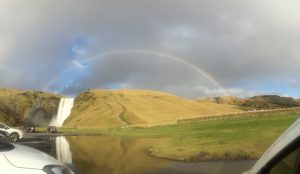 The first day we checked in at the hotel, the woman at the reception desk mentioned that if we were going to be heading out on the No. 1 highway (the ring road, or Golden Circle as it is more often called) that we may want to check out a place called the Secret Lagoon, which is cheaper and less busy or commercial than the Blue Lagoon. It was on the way back so we decided to check it out. It is most certainly all of the things she said, but I wouldn’t give up going to the Blue Lagoon for it at all. In fact I would say that my pictures don’t quite give an accurate description of what the pool is, but it was pretty nice nonetheless. I would go back, but if I had a choice between the Blue Lagoon and the Secret Lagoon, Blue wins every time no question. 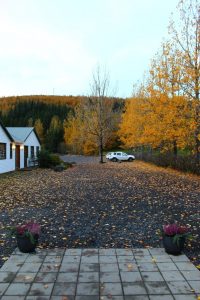 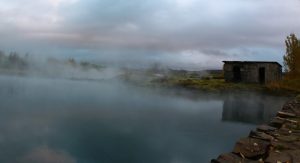 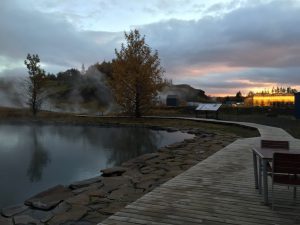 Getting  back into town we finally managed to actually get to the Lebowski Bar and in time to actually order something too. Thematically speaking, compared to the Chuck Norris Grill this place is oranges for sure. Nicely selected and movie-appropriate décor filled the place and they made a hell of a Caucasian. We spent our time quoting lines from the movie before deciding it was something we totally needed to watch when we got back to the hotel. The food was pretty good, though Chuck Norris might have had a slight edge in that department. Overall this is a win though. 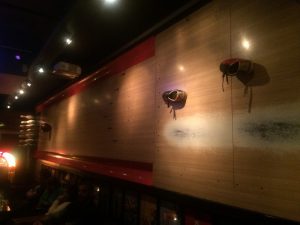 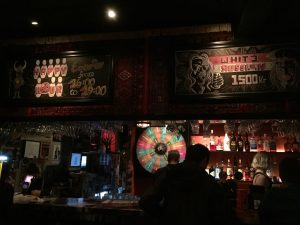 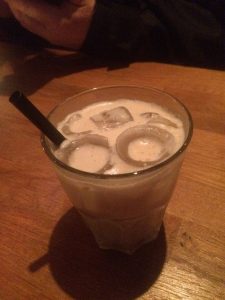 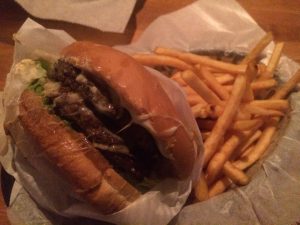 After heading back to the hotel room we rented The Big Lebowski and got through about 30 minutes before my laptop turned off the screen. It would not come back on so I had to force it to shut down, losing the rental somehow, still not sure on that one. I had to rent it again and this time waited for it to fully download, by which point we just decided we’d watch it tomorrow. Lame, since I probably won’t be able to sleep again anyway, but I’m going to need to try I suppose.
Tomorrow: Depending on the amount of sleep we get, we are either going to head to the west coast and see a volcano, or hit up the mall and other places in town we haven’t gotten to see yet. I have high hopes for the prior, but the latter also seems likely. Might try to find some sleeping pills too, but now it’s getting to the point where I might be better off not switching to Iceland time.