I had meant to mention in one of the earlier posts about the situation with this hotel. It is a pretty nice hotel, in fact very nice. With several oddly amusing caveats. The room has a tiled floor at the entrance and into the bathroom, which is heated and feels delightful when walking on it. Pro. Con: when you sit on the toilet the seat shifts slightly to the left and the lid hits you in the back. Every time. Pro:  there are pretty nice hardwood floors in the room, they look nice. Con: the beds are on wheels, so they roll around on the hardwood floor super easily. Why?! Every time I look at them they’re in a different spot, and not by a little bit, it’s like the Icelandic elves are coming into our room and pushing the beds around while they’re doing whatever elves do. Pro: there are a lot of brochures in the lobby and the staff are plenty friendly and very helpful. Con: you can only get to the hotel from one side of the road and there’s no u-turn allowed. Every time I want to get back to the hotel I have to make 2 extra left turns and use a roundabout to make a u-turn and head back. Con: the water smells like sulphur, it’s like I’m being choked out any time I shower or brush my teeth. Con: you have to put a room key into a slot to activate power in the room, which isn’t terrible I guess and I’ve experienced it before, but now any time I leave my computer won’t charge.
Today we decided to head out to one of the national parks about an hour and a half away from Reykjavik, we didn’t know too much about it beyond that it was a national park about an hour and a half away from Reykjavik. It turns out that Þingvellir is the site of the remains of the original parliament site for Iceland from the late 9th century. There was also a waterfall and some fantastic rock cliffs. All in all, a pretty great trip, especially given that we still had a bit of a short time due to lack of sleep and waking up a bit late. 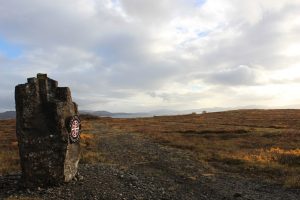 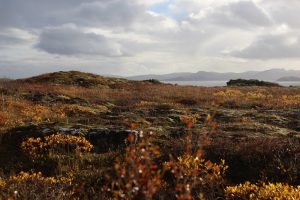 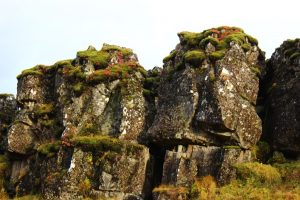 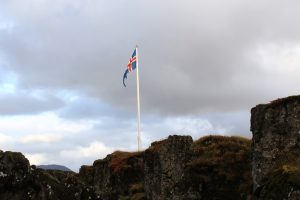 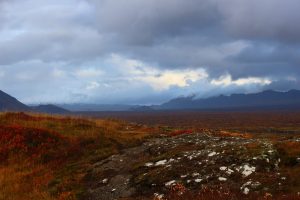 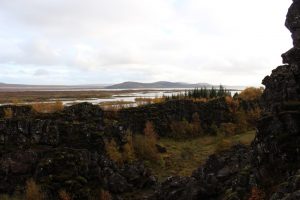 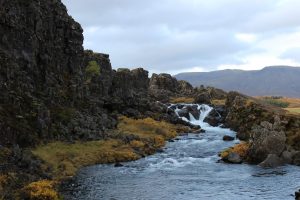 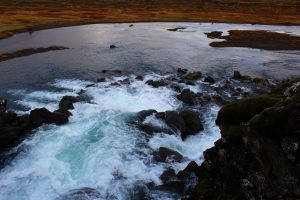 After stopping at another town that we thought would have a waterfall but didn’t (it had foss in the name – gimme a break, plus it turns out it’s the same name as a famous waterfall that’s 8 hours away!), we headed back to Reykjavik and over to the Lebowski Bar hoping to get some food and a White Russian or three. After sitting there for what seemed like forever waiting for a waitress to come help us, we grabbed some menus from another table and decided what we wanted. Still nobody, so we decided to move to a more populated area of the bar to see if we could get some help. When a waitress finally came over, about half a second before she got to the table I read the part of the menu about how they stopped serving food about 5 minutes before we walked in. Hence the lack of service. Dangit. 30 minutes wasted, and it’s not like everything else is 24h in Iceland either, so we needed to move fast. 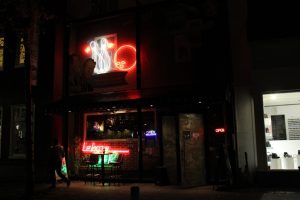 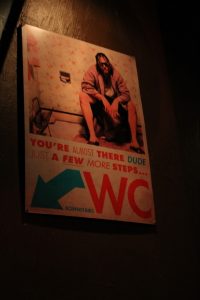 We took the advice of the waitress and headed over to a place called Public House that had a kitchen open until 11:00PM and quickly decided and ordered our food. A couple of mini sliders and crispy dumplings later and we were feeling a lot better about our situation. The food was fantastic (and oddly Japanese-infused) and we met a new “friend” named Ethan from California who was noticeably drunk and had many questions for us English-speaking folk. After discussing who Macklemore was, how much it costs to get to Iceland and how the Canadian National Hockey Team is going to pay for what they did in the 2014 Olympics we paid our bill and headed back to the hotel to try and sleep. 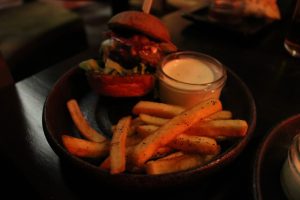 Tomorrow: We have plans to visit a couple of different waterfalls and will try, once again, to get some food at the Lebowski Bar. Now that we know when they serve food until that should be quite a bit easier. We’re also setting an alarm for waking up, but it doesn’t matter because if I can’t sleep I can’t drive, but my internal clock is strong and switching to Iceland time is not easy. I haven’t seen any Dub Edition Baller’s Blend around here either, so I may need to rely solely on natural energy to get me through.