I really did not expect nearly as much issue with jet lag as I have had, especially with only a 6-hour time difference, but it becomes difficult when your body wants to sleep and can’t and then you maybe take a nap a bit later and now my body just doesn’t know what to do. I ended up falling asleep around 8:30pm last night, woke up at 2:00am, looked over at Ron who was looking at his iPad and said, “that’s not good.” Eventually I managed to fall asleep again, but woke up around 1:00pm. We had planned on today being a semi-recovery day anyway though, so it wasn’t the end of the world, but tomorrow I will try much harder to sleep earlier and get up early enough so we can head out of the city and start seeing some of Iceland outside the Reykjavik / Keflavik area.
One thing many people do not know about Iceland is that they love their hot dogs. Setting aside the fermented shark and half of a boiled sheeps head (which people don’t really eat that much of anyway); it’s mostly regular food that people eat, and one of those regular foods is the hot dog, it’s basically their national food. The best of which can be found right here in Reykjavik: Bæjarins Beztu Pylsur. It’s been visited by many people, most notable being former US President Bill Clinton, and if you ask for the Clinton, you get it just like he had it: with mustard. Now there are a few locations, but we chose to head to the main location near the water and across from the Harpa Concert Hall. 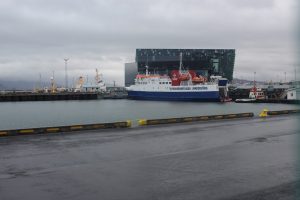 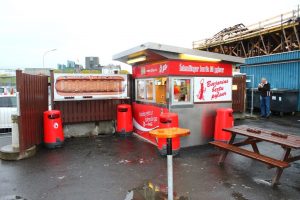 Icelandic hot dogs are different from ours, they contain a large portion of lamb, filled in with beef and pork, percentages vary between even portions to more portion of lamb and less of beef/pork. I believe the ones at BBP are mostly lamb. The onions are a mix of sautéed and raw for flavour and crunch and the mustard is smooth and fancy. You could put that fancy mustard on a shoe and it would taste pretty good to me! I liked it quite a bit, but Ron prefers a grilled weiner and so I think was a bit less impressed. I plan on eating another one or two during my time here. 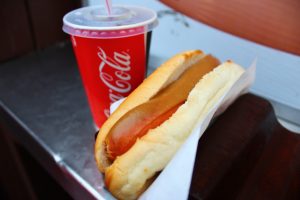 After lunch we walked through the “tourist” area of Reykjavik and looked at several stores including a camera store to look at tripods. I didn’t bring one and would like to have one here, but now I’m stuck in a position of not liking the ones they have here, so do I just buy a cheap one to have it and then get another one back home or get a more expensive one that I still don’t really like but at least it’s better? Maybe I don’t get anything, it’s not like I’ll see any Northern Lights with all this cloud cover anyway! I will take a look at another store. 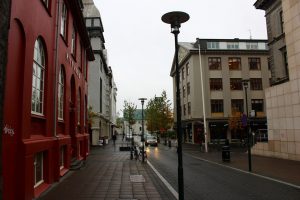 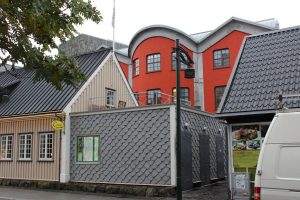 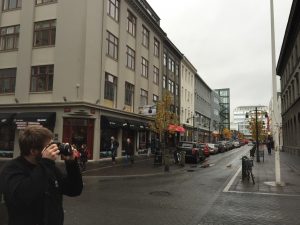 Finding ourselves craving a more substantial meal than a small hot dog, we stopped in at the Chuck Norris Grill. It is a fine novelty establishment, and the food was actually quite good as well. They basically just sell burgers that are named after moves that Chuck Norris does and have Chuck Norris facts on the walls. I regret nothing, though the place did seem surprisingly empty, but it may have been a bad time to go, I’m kind of working on half-Canada, half-Iceland time here, with naps every now and then. 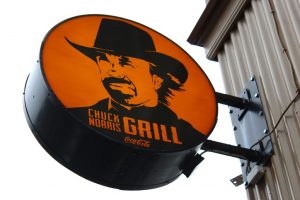 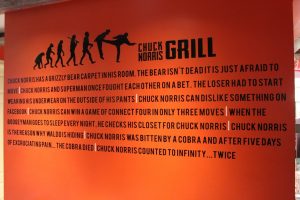 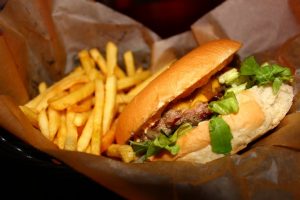 The Icelandic sure do seem to love things from America. Sure maybe not on the level of Japan, but the radio is chock full of American songs and they’ve got things like Dunkin Donuts. We don’t even have Dunkin Donuts. So I got a donut. 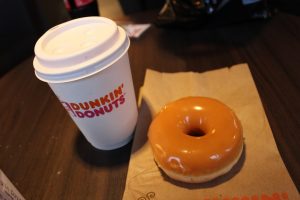 We walked by the Lebowski Bar just to take a quick look at it. We may come back later tonight if we feel hungry again, but chances are it will have to wait until tomorrow. After a short nap, we decided it would be best to try and stay up for a bit instead of going to sleep and so we headed over to one of the few theatres and checked out The Martian which I had been wanting to see, but hadn’t been able to yet. (Sorry b!) The Icelandic sure do love their male nudity. Even just walking up to the theatre there was a large poster for a movie that had visible sack. Plus once full-on in a trailer and once animated. Neat. Also 15 minutes of commercials before the move and 10 minutes at intermission (yes, intermission – I didn’t mind it). The movie was in English with Icelandic subtitles, which was fine by me until the part with the Chinese people speaking Chinese and the Icelandic subtitles but I got the gist of it. 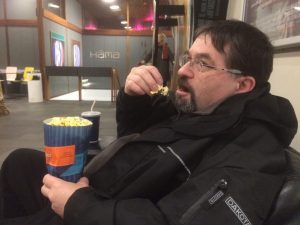 Also, their seats at the theatre had 2 arm rests between seats, so everyone got their own. Way to go Iceland, why can’t we do this?
Tomorrow: We’re going to try to be out of the hotel by around 11:00am to head to one of the national parks and possibly check out some volcano stuff. We’ll know a bit more about what we have time for when we’re ready. I hope staying awake helped, but I don’t really know, sleepy time or lying in bed hoping for sleepy time?