Back in August of this year I received a random text asking if I wanted to go to Iceland at the beginning of September. It was an unexpected offer and one that I certainly could not/would not turn down. September was a bad time to go though, with all the other traveling I’d been doing this year, so I proposed October as an alternative. Not knowing much about when the best time to visit Iceland, it seemed like a decent enough choice. Icelandair has a direct flight from Edmonton, AB to Keflavic, IS and it’s only about 6 hours away, departing at 6:25PM. It seems like such a short time to get all the way to Europe, all we had to do was get to Edmonton.
That 6 hours changes considerably once you take time zones into consideration, and that’s something we needed to do when figuring out how to get to Edmonton. If we leave here at 6:25PM, we will arrive at 6:00AM, or about 14 hours after having woken up. Ready to start the day bright and early! Or not. I’m going with not. The way back isn’t much better, leaving at 6:00PM and arriving at 6:00PM. Still as a man known for pulling all-nighters and staying awake for days at a time in my youth, I assumed it would be a piece of cake. Still we figured that driving 3 hours from Edmonton to Calgary after a 16 hour day, much of which would be spent in a cramped chair in a flying metal tube, was a bit terrible; we booked flights between Calgary and Edmonton.
We had a bit of time at the Edmonton airport before boarding to Iceland so we stopped in at Montanas for supper. The menu was a bit weak, but we found a brisket sandwich that looked decent enough. Ron was feeling particularly hungry and so upgraded it to the 1 lb American-sized version. Need to grow big and strong! 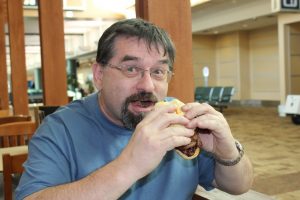 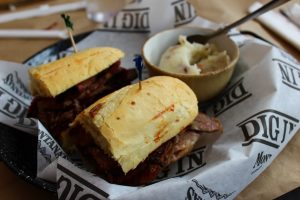 Afterward we headed over to gate 64 and waited for our boarding call. The entire Icelandic crew was sitting at a restaurant across from the gate and they were so obviously Icelandic. Authenticity level up! After boarding the plane however it was an interesting game to try and pick who was heading home to Iceland and who was going to visit Iceland, but I just assumed anyone blonde and/or good looking was Icelandic. Obviously I fit into that group as well, so I was blending right in. 😐 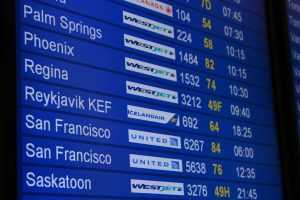 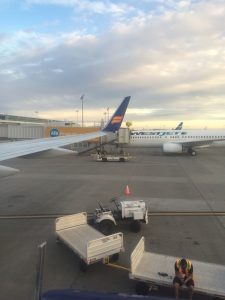 The plane, a Boeing 757, was fully Iceland-equipped, including Northern Lights! I fully expected an elf to appear at any moment while boarding. One of the most things I was most excited about doing on the flight was ordering food, it’s never amazing food and I’m almost never really that hungry when I fly, but there’s just something cool about ordering food on a plane. It has to be done, there’s no way around it really. What made this time so exciting and different though, was that one of the options offered on the flight was mini burgers from Iceland’s most popular burger restaurant Íslenska Hamborgarafabrikkan (the Icelandic Hamburger Factory). They were sold out by the time they got to me. Then I was sad. The ham and cheese baguette was okay. I guess. 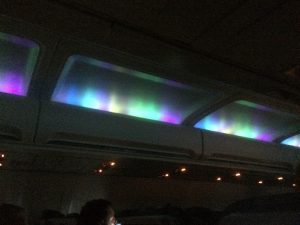 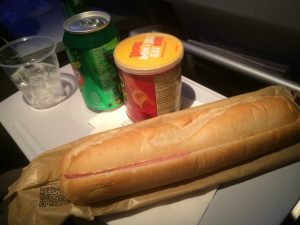 I tried my hardest to sleep on the flight over, but couldn’t make it happen. Luckily they had a USB port to charge my phone and free movies and TV, so I played a bit of Yahtzee and watched the original Mad Max. I dozed in and out but the iPad-sized pillows they gave were only so comfortable. Luckily the seat beside us was empty so I doubled them up. Still, the best it could do was prevent the armrest from crushing my ribs as I tried to reach my head somewhere it could be comfortable near the window. Getting to the airport, we were informed that Canada’s screening process did not meet EU standards and so we would need to go through security again. I don’t know what extra things they did that Canada didn’t, but it sure seemed about the same from where I was standing.
The airport was nice enough, but poorly laid out and it felt like we were going in circles to get through various points and finally to the rental car area where we met up with our Enterprise shuttle driver. He suggested various things we might want to do such as get a SIM card for our phones, which I had forgotten to do. He also informed us that we should try fermented shark, since it’s a thing to do, but not something he would do. It smells like piss he said, and he wasn’t into that. I don’t think too many Icelanders are, but they like messing with tourists so they just keep selling it anyway. 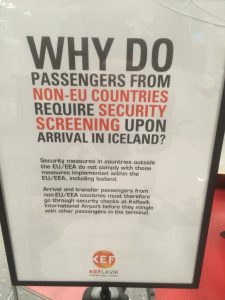 The taxi ride from the airport to Reykjavik is approximately $150 each way and so we decided that it would be best if we just rented the car for the entire time we were in Iceland. I booked a Toyota Aygo or similar online before arriving, but was pleasantly surprised to be given a turbo-diesel 6-speed manual transmission Toyota Yaris hatchback (with heated seats!). It’s seriously fun to drive and the roads are well maintained and smooth. It came with winter tires, though I’m not sure how needed they are since the low temperatures right now are still above freezing, but I’ll take them I guess. 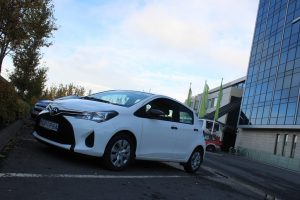 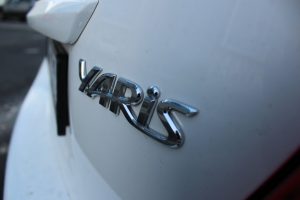 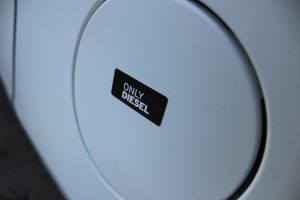 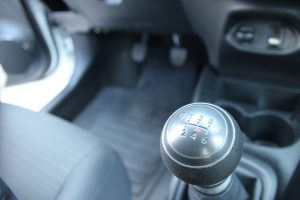 The hotel is nice and modern, but wouldn’t have our room ready until after noon, several hours from our arrival. We pondered what to do and ultimately decided to stop in for the breakfast buffet. It was crowded and not the most inspired culinary creations, but it did the trick and brought us a bit closer to our check-in time, still several hours away. I spent the rest of those hours dozing in and out on a couch in the lobby, something I may or may not have done on a previous trip to Las Vegas in a not-so-subtle Mercedes convertible back in 2013. After getting the room we booked a time to go to the Blue Lagoon and set an alarm. Still, napping in an actual bed wasn’t for my body at that time, so I lay there instead. Scumbag human body. 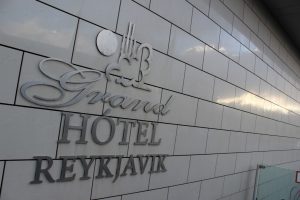 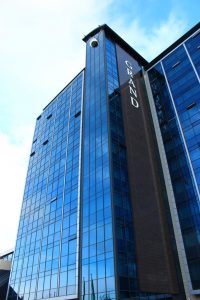 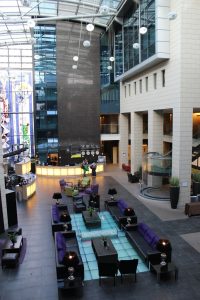 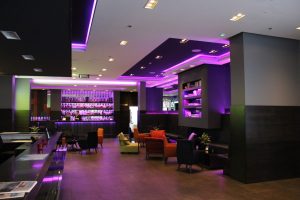 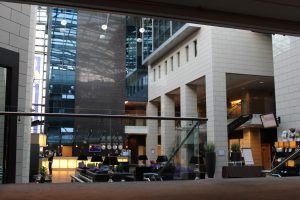 Sometimes you’ll see things online like pictures and descriptions of tourist destinations and you never quite expect them to look exactly like they do in the pictures. They photoshop a bit here and do some colour adjustments there. The Blue Lagoon is as cool and as picturesque as I saw online. I was super impressed. It is a very well set up facility with wristbands that allow access to wherever you can go, as well as allowing you to get drinks from the pool bar (which we did, of course). The pool was huge and blue and we did all the things including coating ourselves in white mud face masks. I accidently left the camera’s memory card in the hotel room and so was limited to using my phone like some sort of normal person.  We may head back again though, it was super relaxing, even with the creepy gooey mud at the bottom of the edges of the pool and having to scoop mud out of my ears (thanks Q-Tips!). 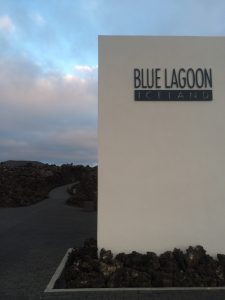 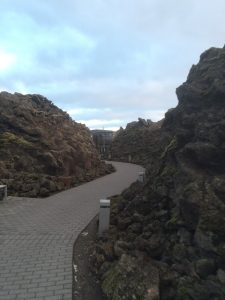 After the pool we headed back to Reykjavik and planned on heading to the Lebowski Bar, a Big Lebowski-themed bar, but after stopping to get the camera’s memory card at the hotel I found myself drawn to the bed in a way I had not before. We settled for a burger from the hotel restaurant. I hope to sleep for an extended period of time, but who knows at this point. Jet lag sucks. 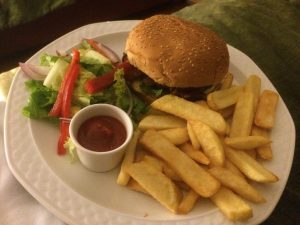 Tomorrow: I try to not be sleepy. Also going to check out some local stuff around Reykjavik including a hot dog. Might see about getting myself a tripod too, if it’s not cloudy I’m hoping for some good actual Northern Lights. My blog post might be more entertaining too, who knows.