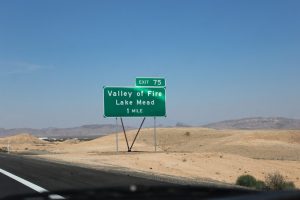 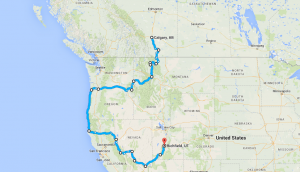 When it’s over 40 degrees, your desire to be super productive seems to fly out the window a little bit I’ve found. Still, we managed to get a few things done before we left Las Vegas this morning. We checked out and grabbed the car from the valet; thankfully we don’t think they had any speed bumps or parking blocks in their valet parkade, so the car’s bits were safe. We headed down to the south end of the strip and returned to the scene of the crime: the self-parking parkade at Mandalay Bay, where the car sat for the better part of 5 days as we did our best to get back on the road last time. Victorious and dirty, we left the car and went inside to the buffet. 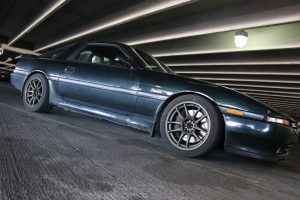 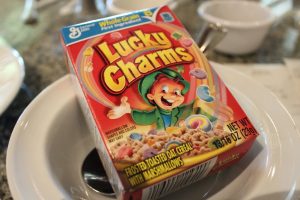 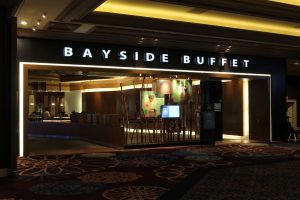 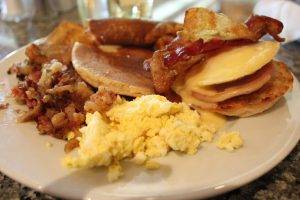 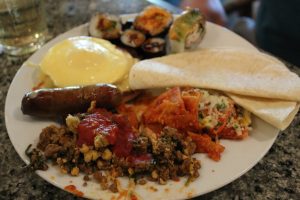 When paying for the buffet they give you the option to get champagne for $5.00. It sounded relatively reasonable, and it was my birthday after all, so I figured what the heck, I’ll get some champagne. I did not expect the bucket of champagne that was delivered to the table. It was seriously just a huge plastic cup of champagne. They must just have barrels full of the stuff in the back. I have to drive, it’s 10:00am. I did not need this. 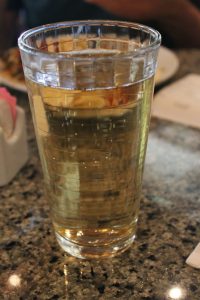 The buffet isn’t the absolute best on the strip, nor is it the absolute cheapest, it’s a pretty happy medium and I’ve had it before. It’s never disappointing, and we were already right there so it worked out perfectly! Unlike their corn, which like every time I’ve ever had corn before in the US, was so overcooked it was actually kind of gross. I still got it and ate some of it though, mostly so I could talk about it in the blog. The things I do to entertain others. 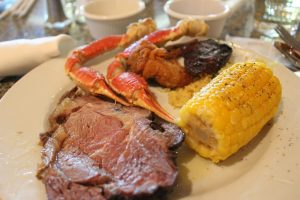 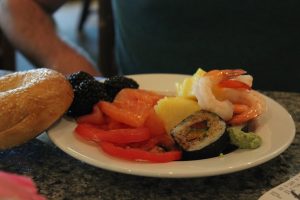 As we had kind of decided this would likely be our only real meal of the day, we decided to be perfectly reasonable and only get what we absolutely needed to eat to survive. John’s desert plate accurately portrays this sentiment. I had less, and was basically starving, I swear. 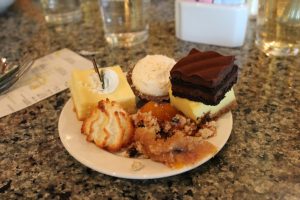 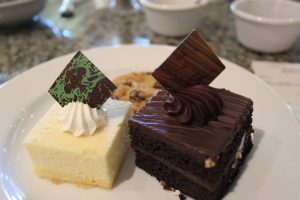 After leaving the buffet, I made sure to stop over at one of the frozen slushy drink places to get one. I had really wanted one of those crazy huge 50 oz. ones yesterday, but couldn’t seem to find one I liked at the north end of the strip. Unfortunately since I needed to drive I got the smallest one they had and only had a bit of it, but it was sufficiently delicious as we walked back to the car and the temperature became increasingly ridiculous. 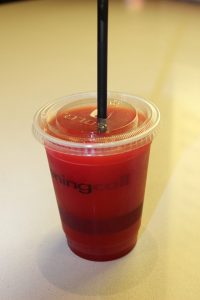 Before heading out of town, we stopped in at Petsmart to get 26 cans of cat food for my girlfriend’s cat. They are all sold out in Canada, and Maui needs her shredded chicken with chicken liver, so I’m stopping where I can to make sure she doesn’t need to eat some sort of inferior food. If I get to eat good on this trip, apparently she does too! As the temperature continued to climb into the mid-40’s, the car became increasingly unhappy with its lot in life, and so did we. Using the A/C was causing the temperature needle to rise, not to unreasonable levels, but preferring to err on the side of caution, we didn’t let the gauge get too high before turning off A/C. 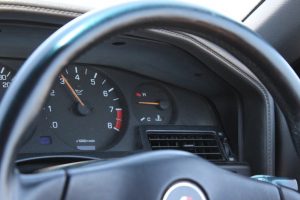 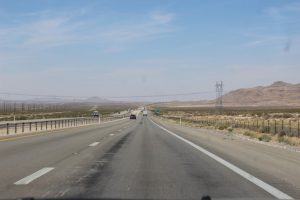 This is a proper desert. Like the kind you read about where people want to die. I mean I didn’t want to die, but it wasn’t comfortable that’s for sure. Once we were on the open road we tried to keep the A/C on as much as we could since the moving air could at least keep the engine temperatures reasonable. It didn’t really matter too much though, since the A/C system was getting too hot and turning off. We tried to strain it less by using ECON, but even in that lesser mode it would still build too much pressure and turn off. As we stopped in Mesquite, NV, the feeling of victory was significantly lessened by the 46 degree temperatures. Significantly. Still, pulling into the McDonald’s parking lot where we were stranded for the better part of a day under the car’s own power felt pretty good. 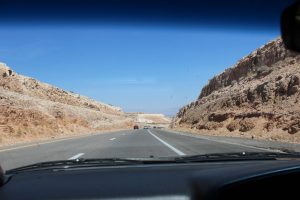 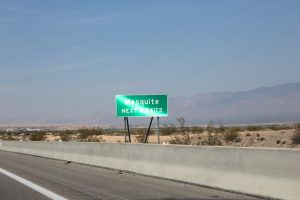 As I sat in the glorious delight that is air conditioning, I ate my small cone and reassessed where we were going. It’s not often I replan a trip to take into account the weather, but we needed to get out of this blast furnace. For sanity. We hadn’t even gone that far, but it felt like way too long a time to get here. I decided that after hitting the Highway 143 past Cedar City, UT we would continue heading north instead of south and go to Colorado on the I-70 instead of through Page, AZ. It still sounds pretty warm, but dropping down to 33 degrees felt incredible and cool. The shade was even better. 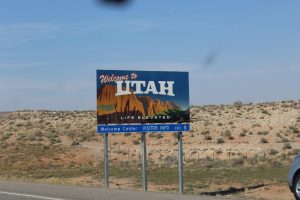 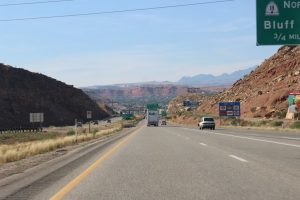 As we left Cedar City, we headed into the mountains and found something that was a nice sight, a wiggles sign. There were curves ahead and trees and other plant life around. Things were becoming reasonable again, and roads were getting interesting and a bit more fun. The A/C was fully functional and we were feeling pretty good about our new situation. 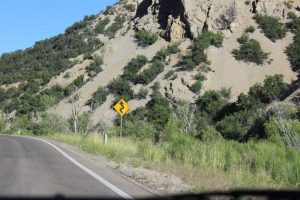 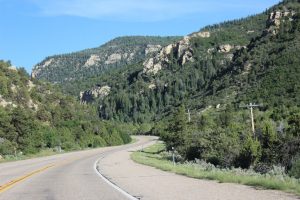 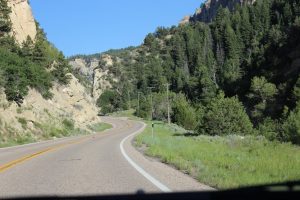 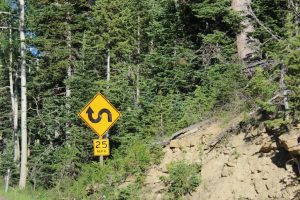 Approaching the top of the mountain near Brian Head, the temperature had dropped down to the low-20’s, which was pretty much the best feeling ever. It was also quite the view. 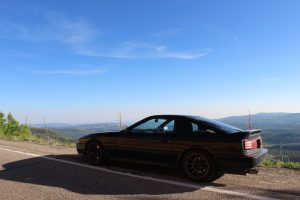 Taking some of those photos, I climbed up the rocky opposite side of the road. Upon reaching my vantage point, I realized it may have been a mistake as I was standing on a steep gravel-type rocky face. Upon trying to move, I slid down and my leg took a bit of a beating. These are the prices you must pay to get the shot that you (sort of, pretty much I guess) want. 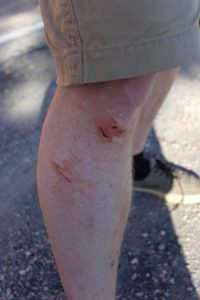 Despite having read that the Highway 143 was one of the best drives, it didn’t really impress. I mean it was actually very nice, and exactly what we needed today, especially after our earlier jaunt through the desert, but it was basically just a very pleasant drive with some pretty nice scenery. As we drove down the mountain, we ran into the I-70 and headed up to Richfield, UT where we got a hotel and settled in for the night. 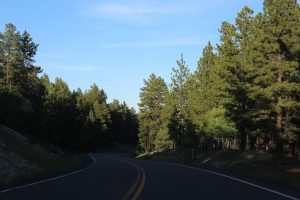 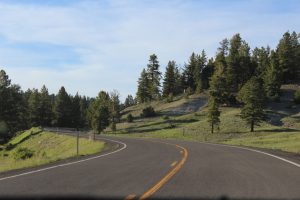 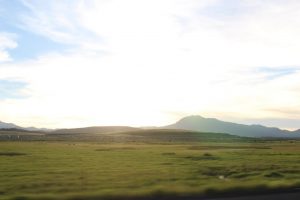 (This was really hard to do while in a moving car at 130 km/h, just saying.)
Tomorrow we’re heading to the Million Dollar Highway in Colorado, should be a nice drive, though I’m not expecting a real driver’s road until the day after that when we hit up Skyline Drive and Pikes Peak. Weather forecast is for mid-30’s. I am surprisingly okay with that.
Day 9 Destination: Montrose, CO through Durango, CO via Million Dollar Highway (Highway 550)