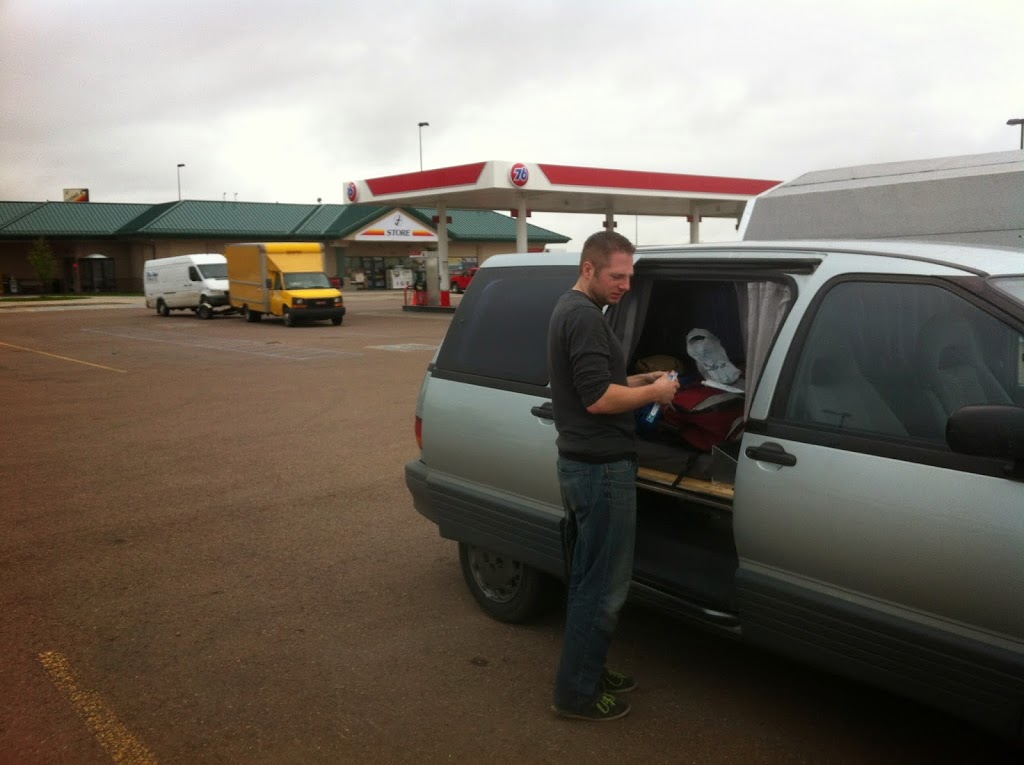 Destination: Denver, CO
State Count: 3
End of Day Odometer: 338,301km
We woke up relatively late after arriving at the Flying J pretty late on Day 1, and despite a long drive today, Denver is just a stepping stone on the way to our first actual stop in Kansas City so we have no real plans for activities there. We had considered stopping somewhere from Diners, Drive-Ins and Dives, but it’s not high on the priority list. 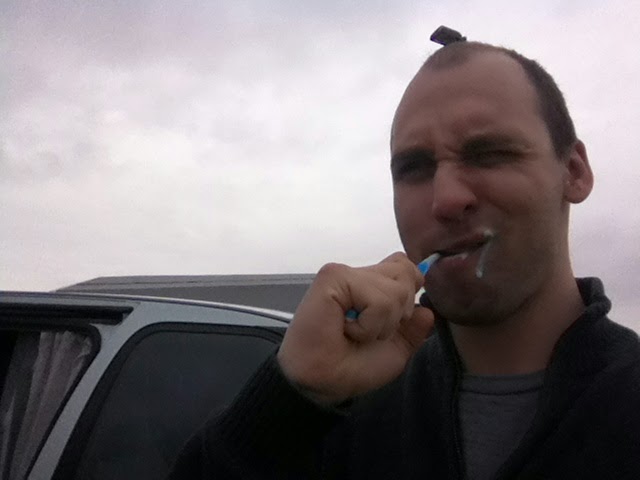 The Flying J truck stop in Great Falls has a Denny’s attached to it, as many of them do, and it seemed like a convenient way to get breakfast without taking too much time, so we stopped in for something to eat. I had the cinnamon pancake breakfast and John had a skillet with the red skinned potatoes deep-fried (as they used to be in Canada, but aren’t anymore). The pancake below the top pancake only had cinnamon and cream cheese sauce on half of it. Disappointing. 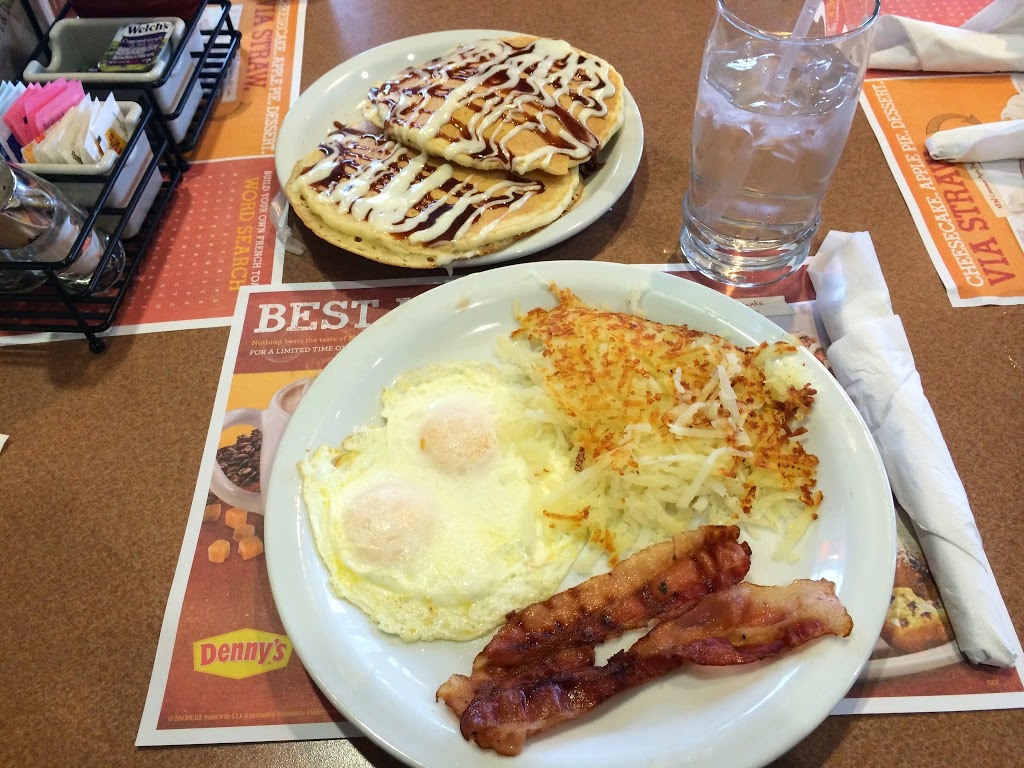 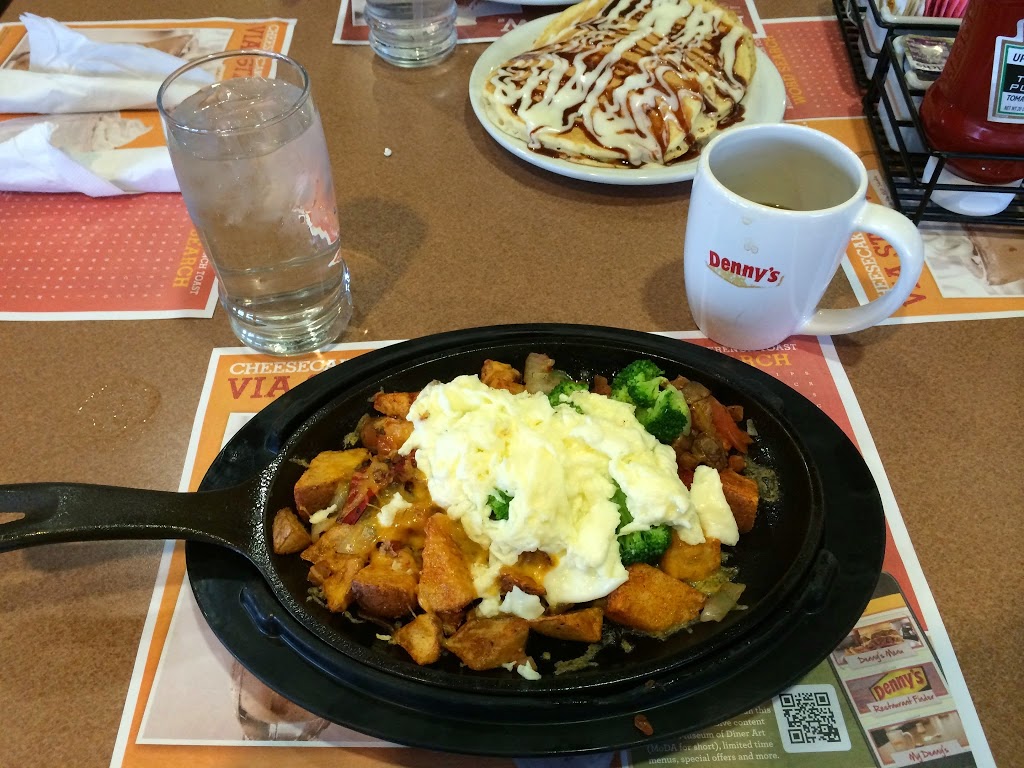 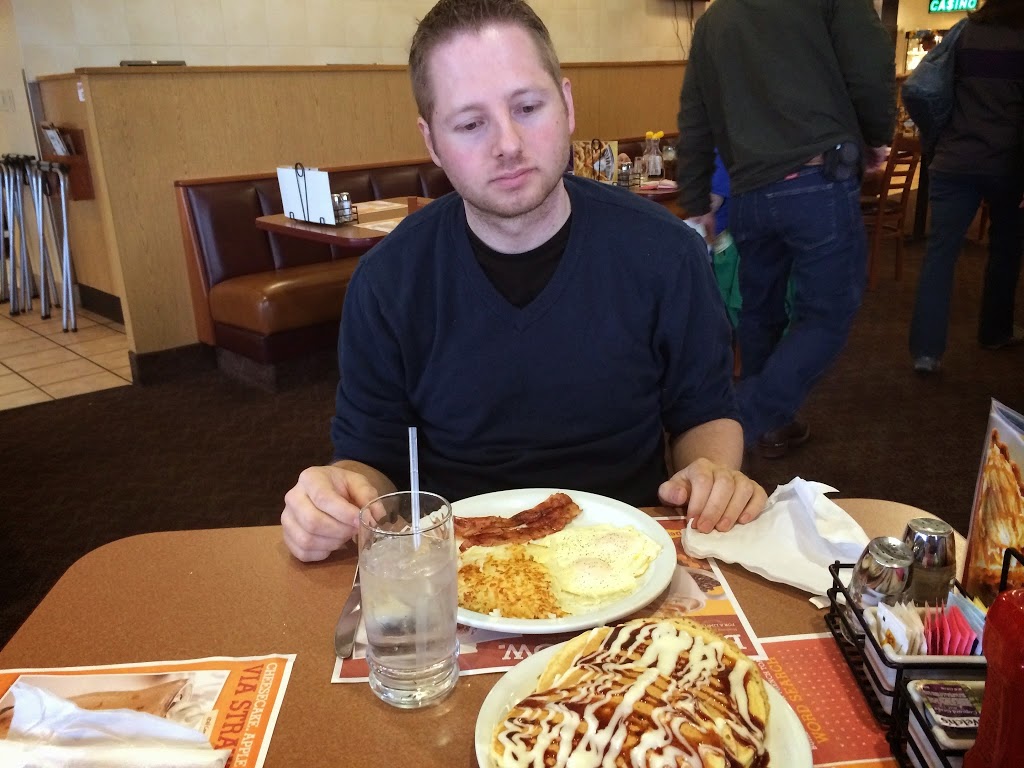 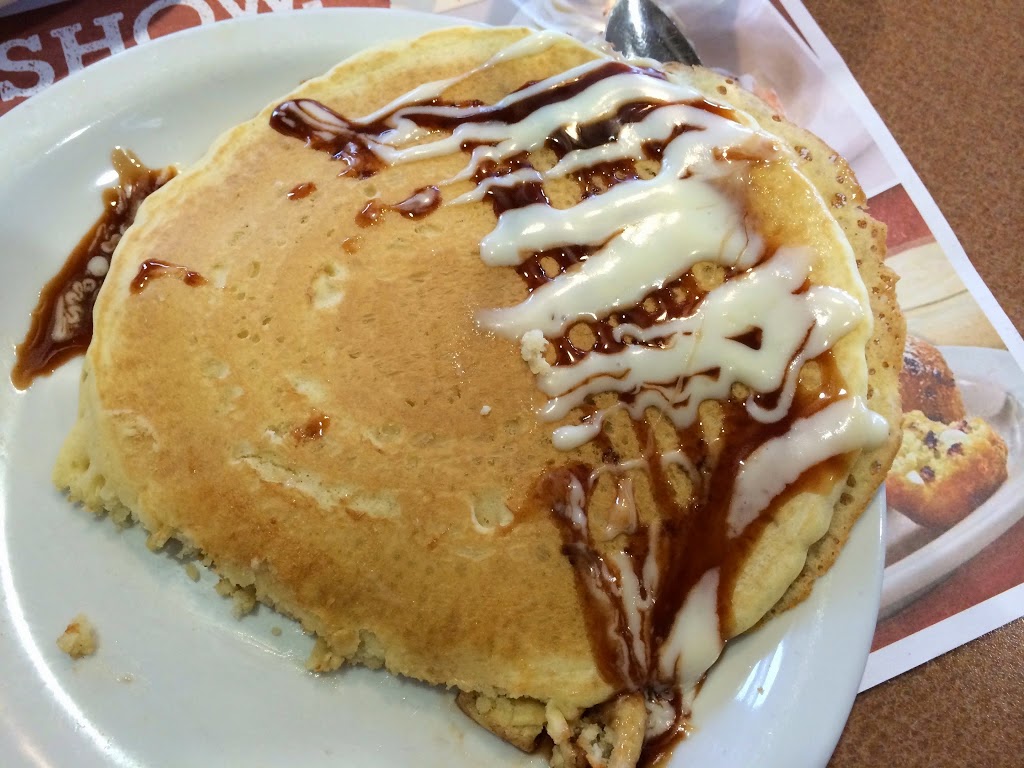 After breakfast we rolled on out and headed towards Colorado through Wyoming. 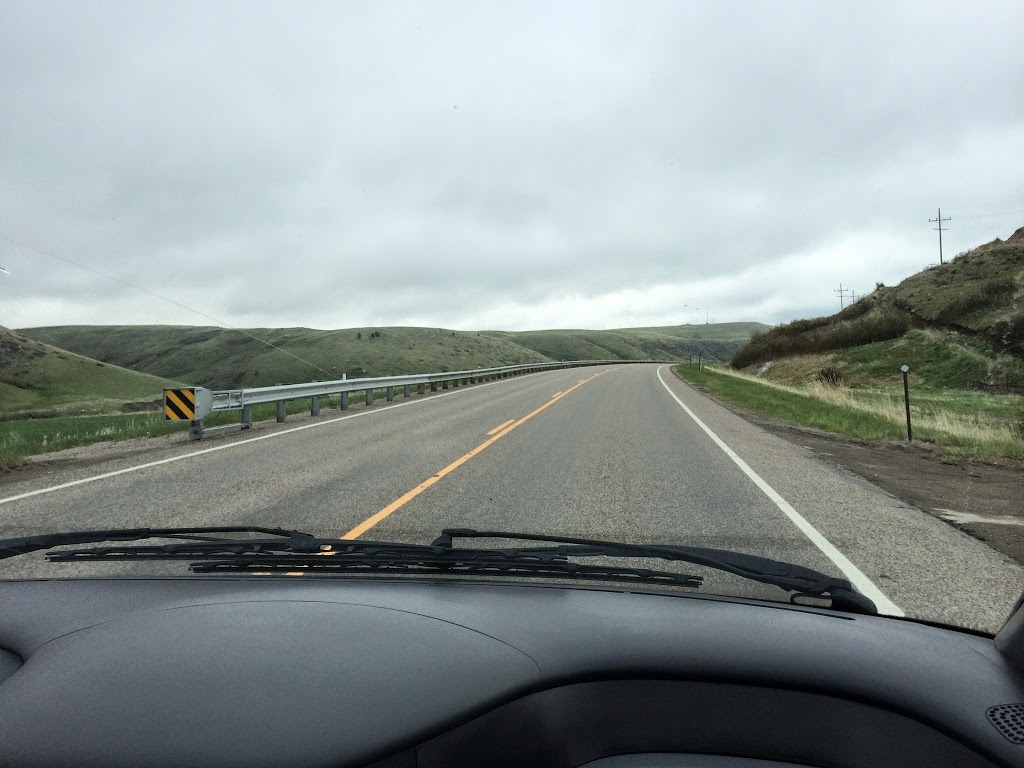 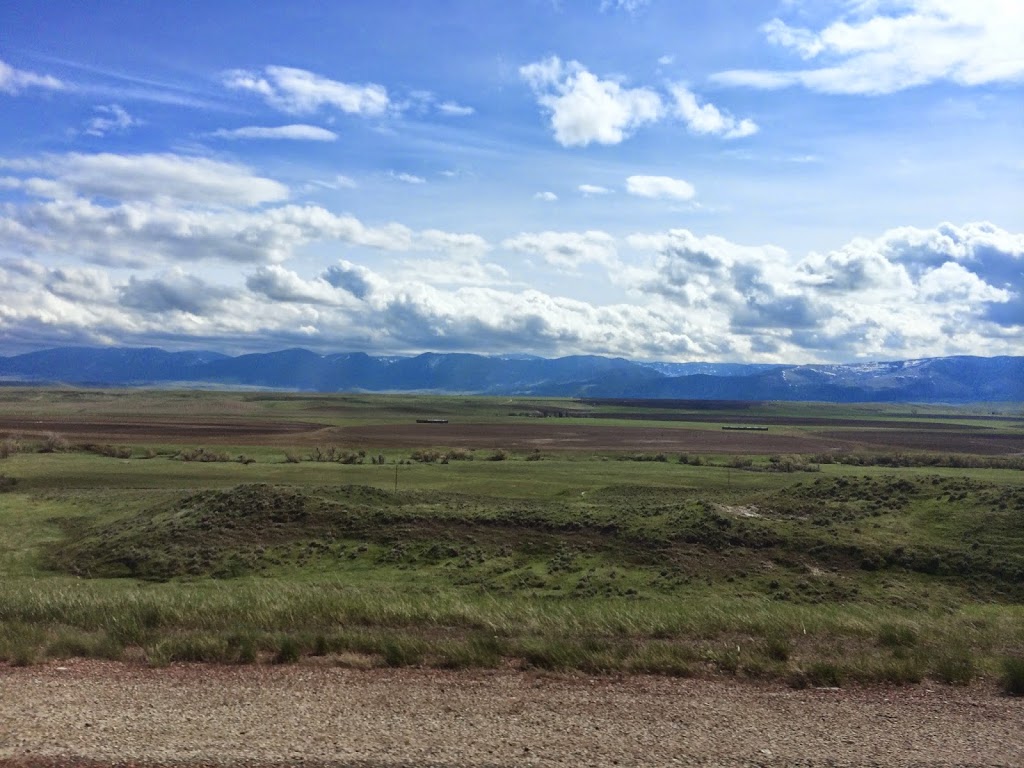 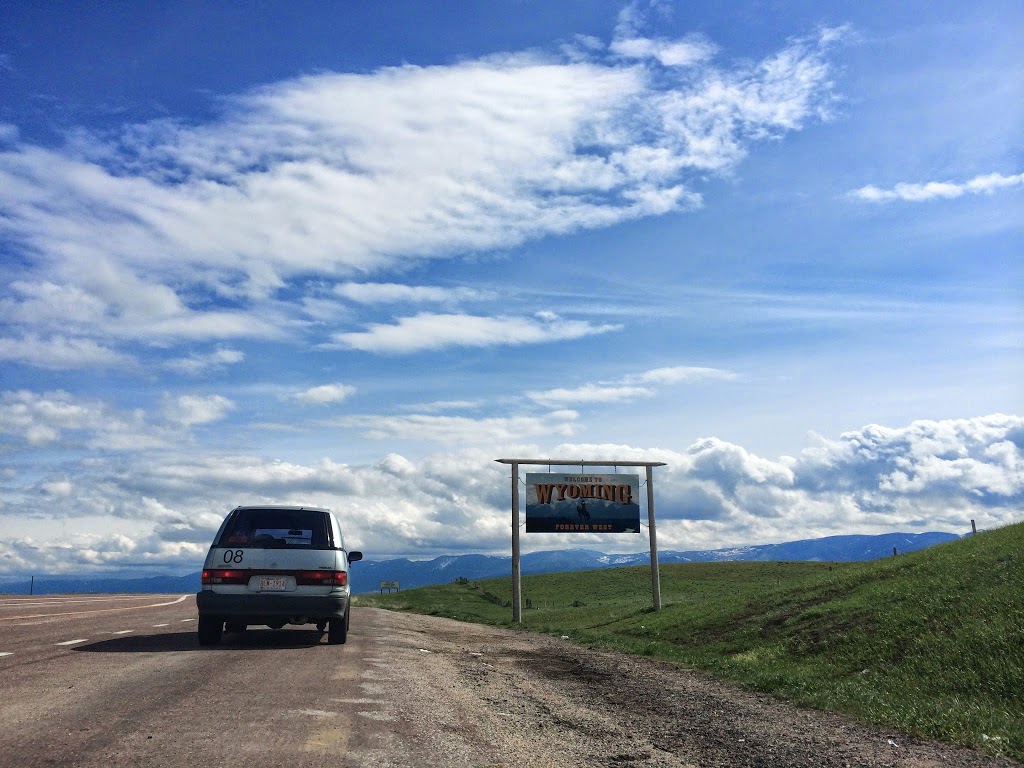 After driving for a while we found ourselves a McDonald’s for that sweet, sweet free wifi to upload the blog and ingest some malnourishing freedom. It went okay. Their wifi was disappointingly slow and they screwed up John’s order by large margins. He ate it anyway and was noticeably sad about it. I had a Quarter Pounder Deluxe which John also ordered, but instead received a Double Quarter Pounder (not Deluxe) and with a side of unordered (but paid for) fries. After eating (and forgetting to take pictures of the food – it can be pretty hard to remember at first) and cleaning up the tray I found that the stainless steel top they had on the garbage was very sharp. Surprisingly sharp. 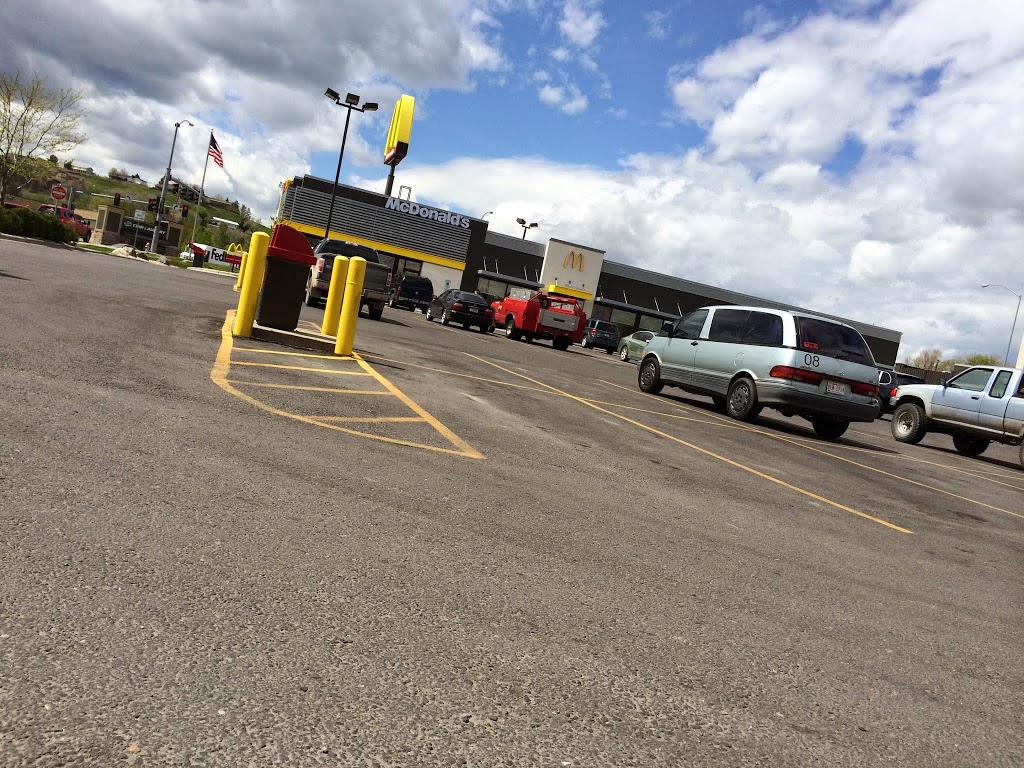 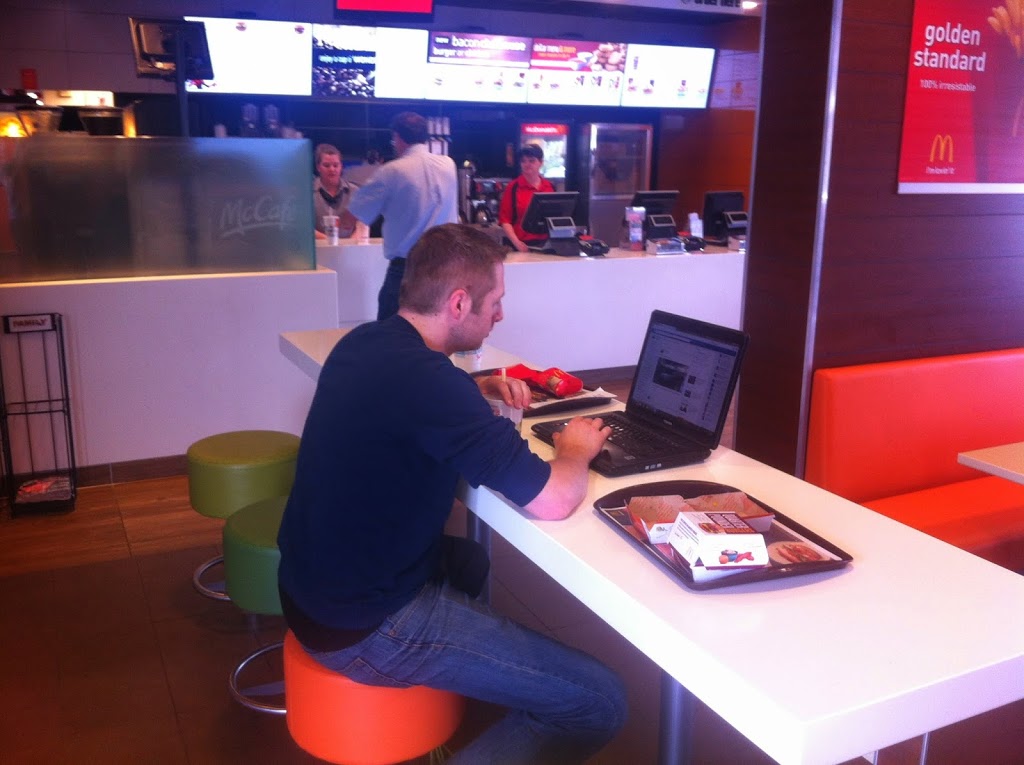 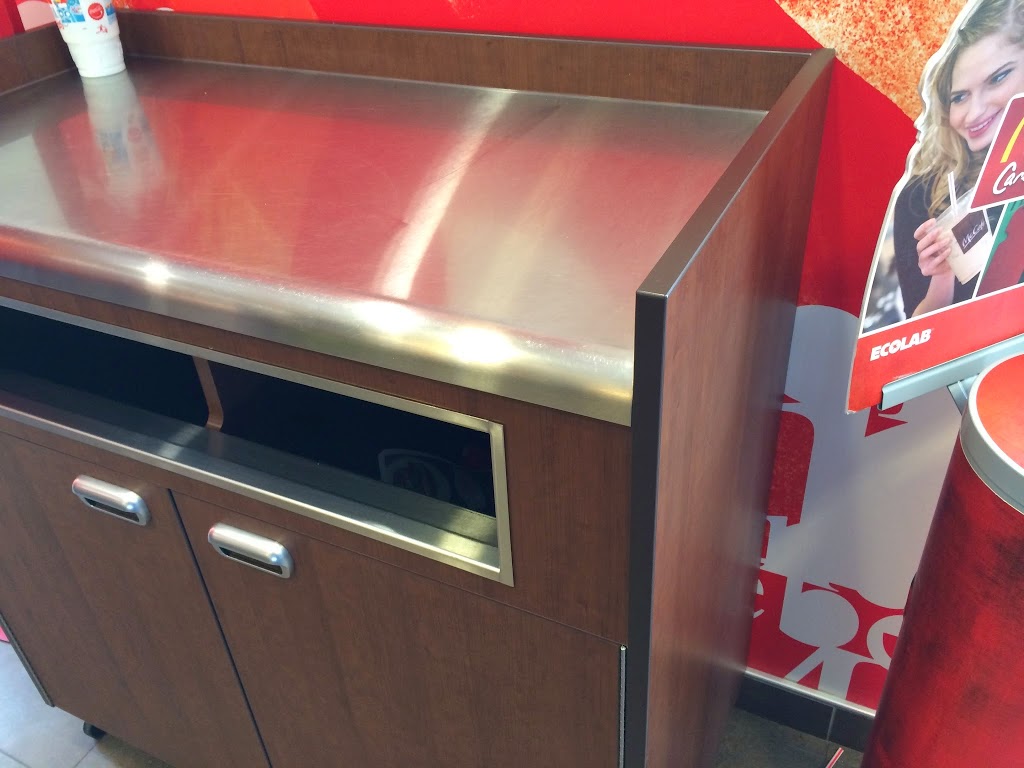 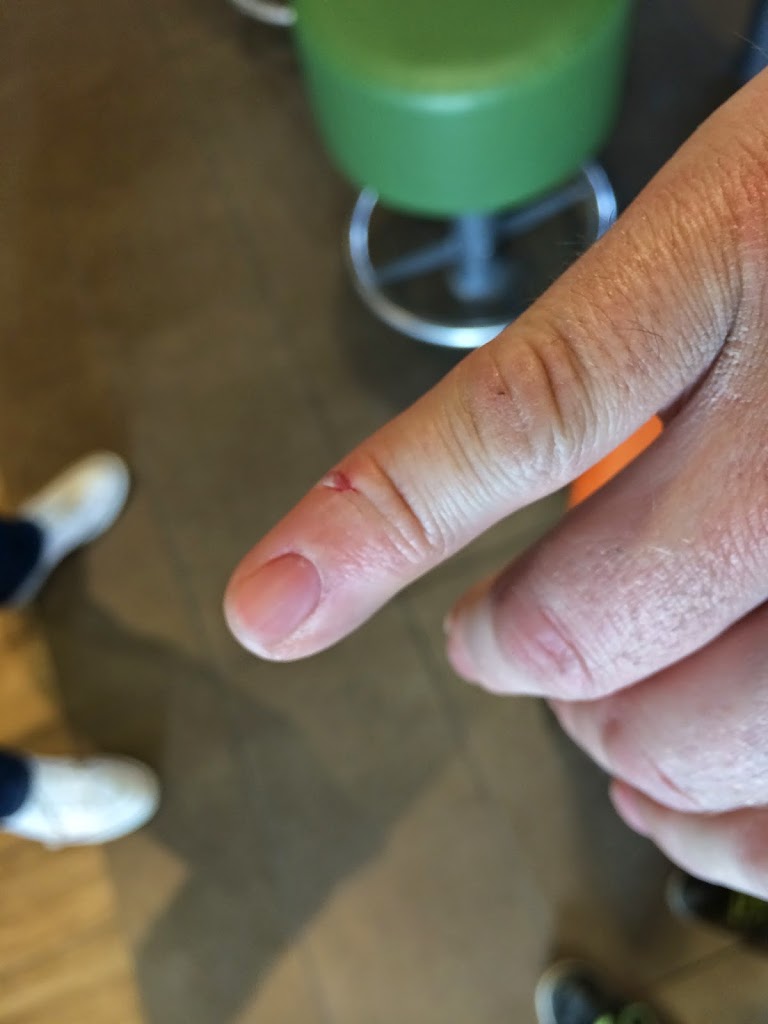 After stopping to buy some Band-Aid® Brand adhesive bandages and filling up with gas we were on our way again. While inspecting the operability of the air conditioner (we had just refilled the R134a before we left), the blower switch jammed up and stopped moving. This is an unfortunate situation as I soon found out while attempting to trail fix it while we were moving. There are seven, yes SEVEN selection cables heading to the climate control in the Previa, and it seems like they were likely installed on the control before insertion into the dash, which means I may need to remove all of them in order to get the switch out. The switch casing appears melted and when moving the knob it broke apart, there were no survivors. We decided to just throw it back together for now and worry about it after we actually have a replacement switch, which I may try to order from a Toyota dealership in Kansas on the road tomorrow. Getting it installed properly may need to wait until we get back, that way Kurtis can deal with it instead. We know how much Kurtis loves working on the Previa and this job seems right up his alley. 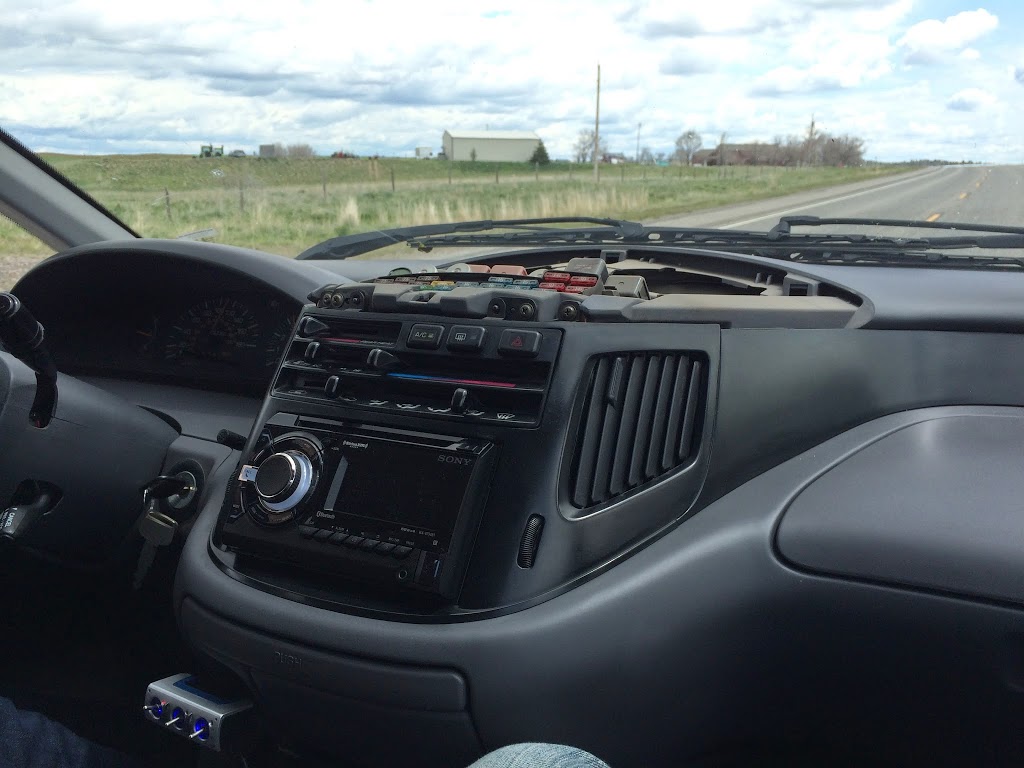 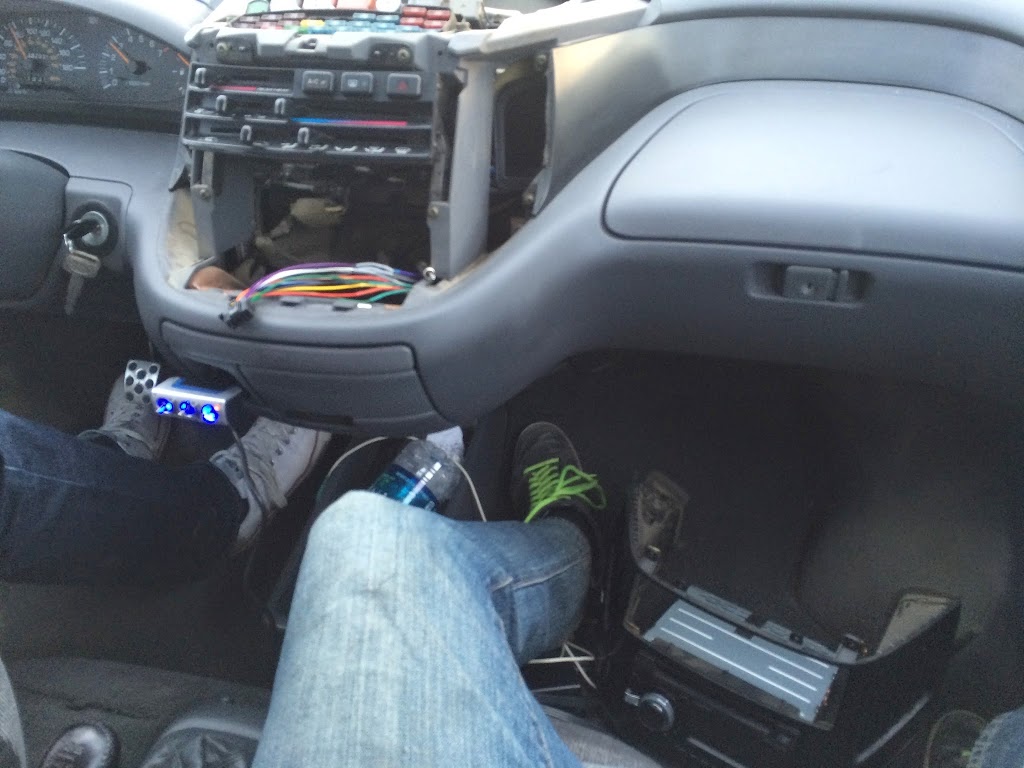 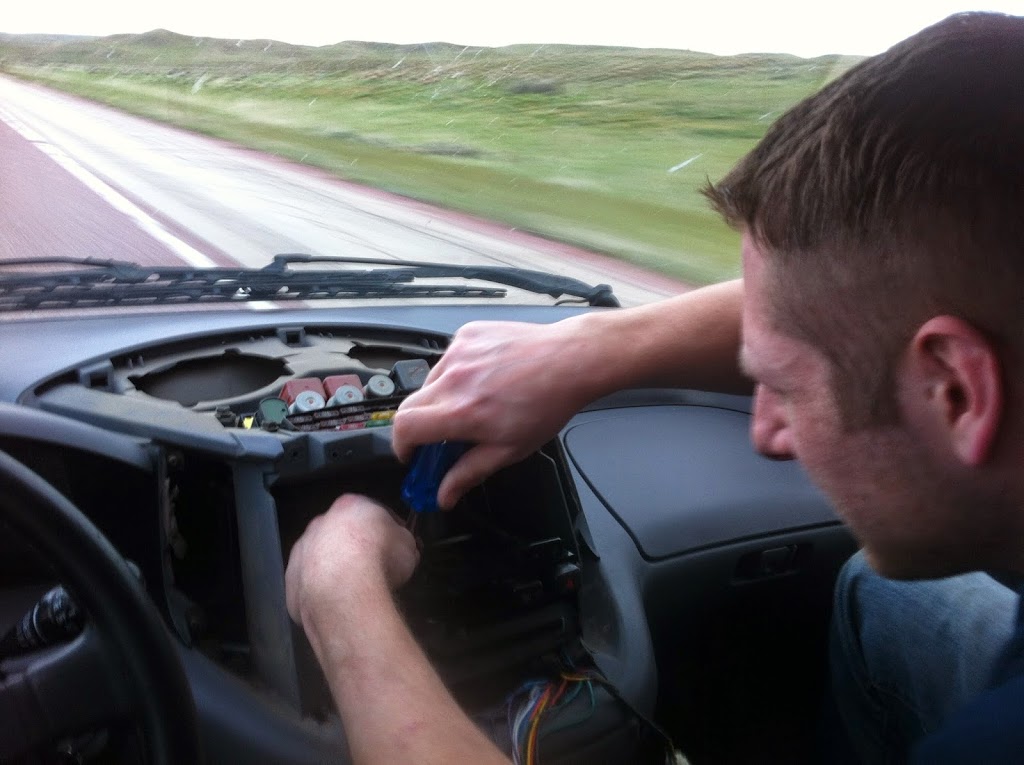 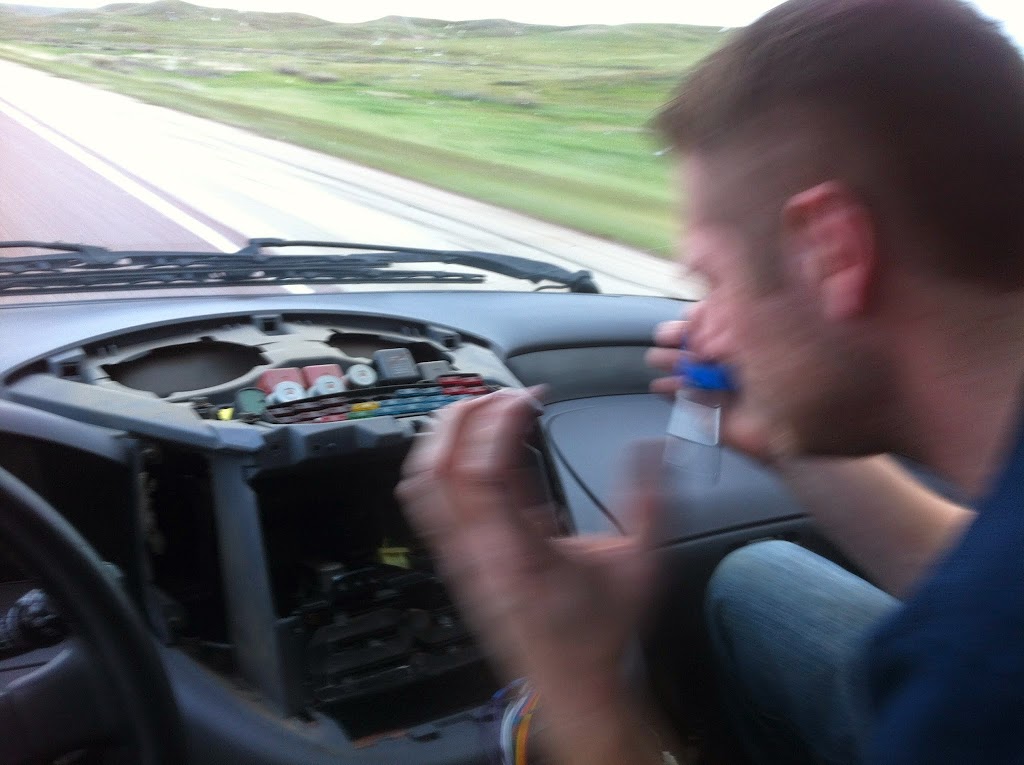 After giving up on fixing the climate control we made our way to a Flying J in Denver and after driving for 12 hours it seemed like a good idea to grab something to eat. Denny’s was again extremely convenient so we stopped in for Club Sandwiches. Our server gave John a very confused look and then asked twice what he meant when he said “brown bread,” which made us laugh. Local terms for things can be pretty amusing sometimes. The sandwiches arrived without a centre piece of bread, which is really what makes a club sandwich a club sandwich. America, you crazy. 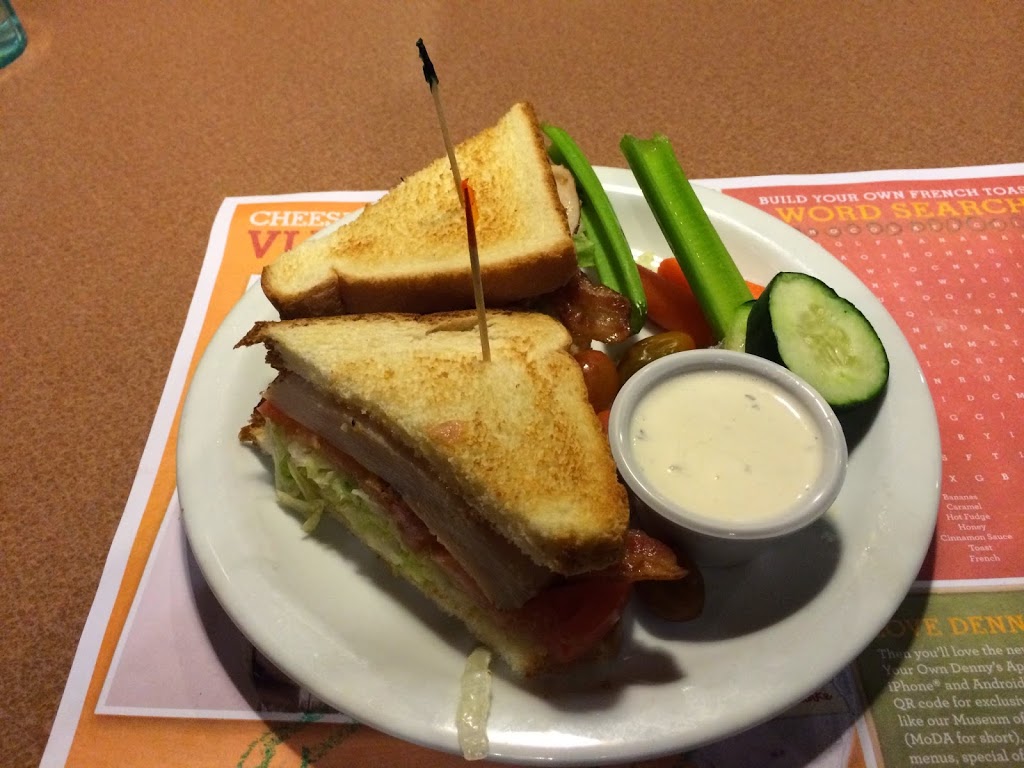 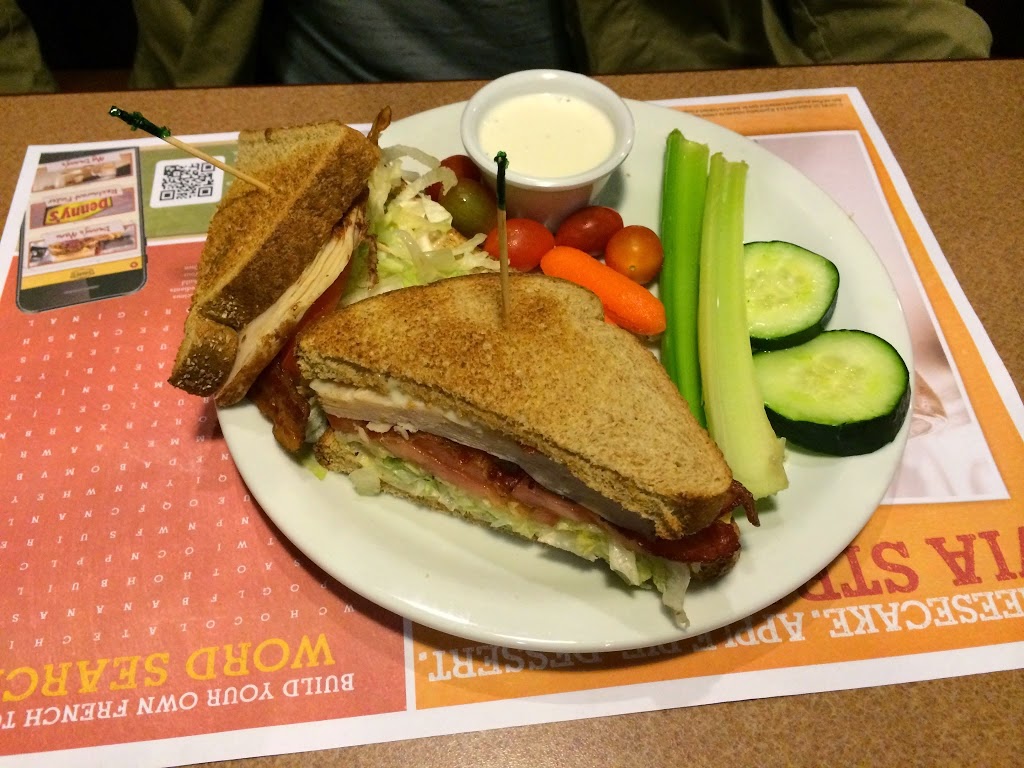 It was a long day, but there is hope at the end of the yellow brick road tomorrow, when we get our first taste of that edible gold that is Kansas City barbeque. Oh man, oh man. 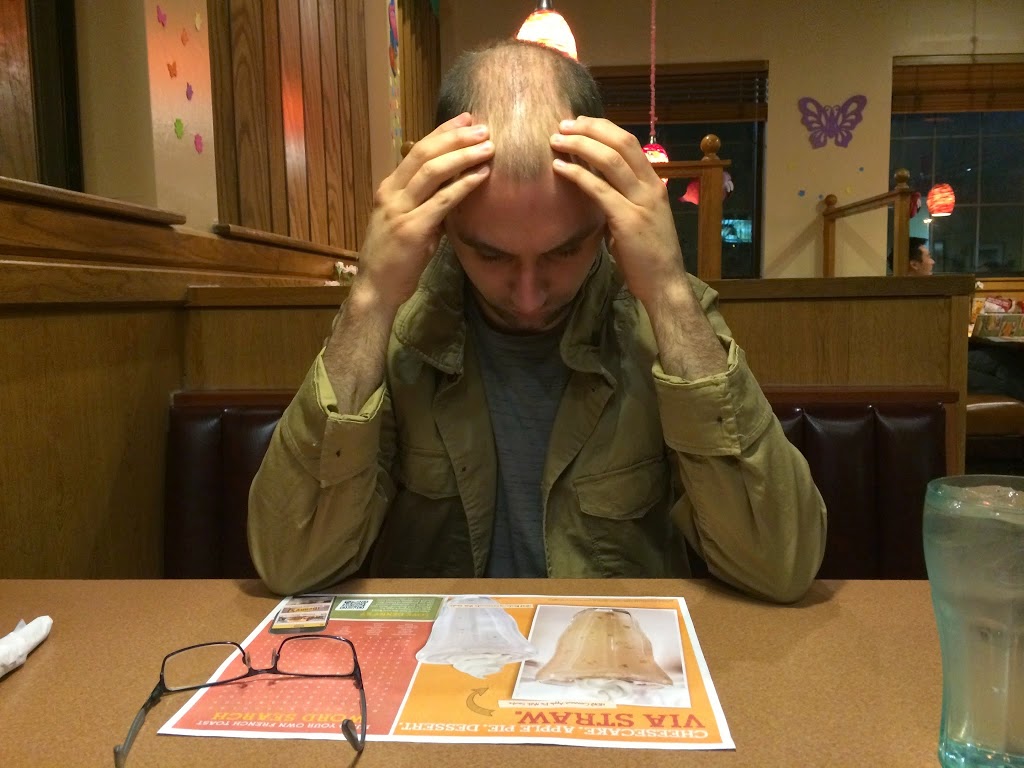