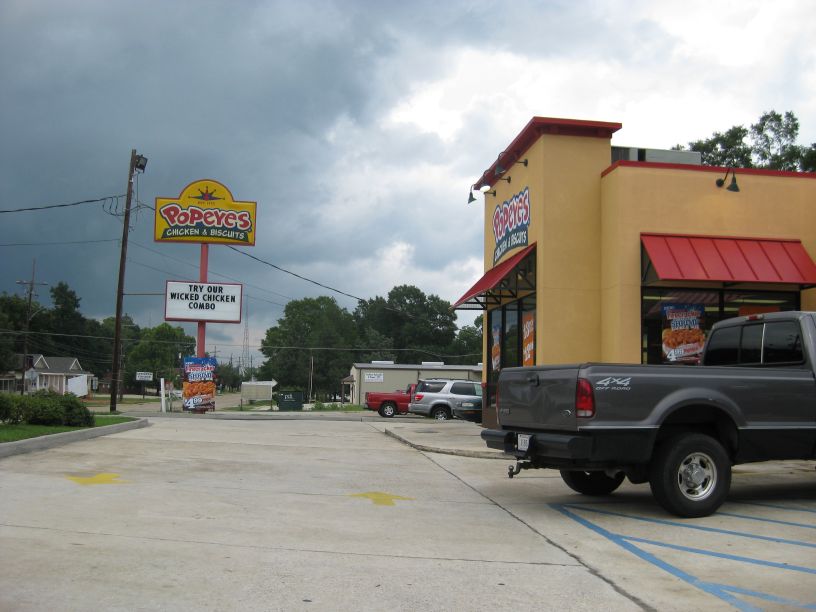 Destination: New Orleans, LA
End of day Odometer Reading: 217,430km
We left the truck stop mid-morning on our way to New Orleans. We figured we’d find one of the other USA-only restaurants on our list to visit for lunch. The first while of driving was pretty uneventful, but at least it was lightly raining and the temperature was pretty nice. It was a good change from the ridiculous hotness that we’d been living in for the last little while. We stopped at a Chic-Fil-A to get some lunch, but then realized it was Sunday, and Chic-Fil-A is always closed on Sundays. We ended up driving for a while longer and pulled into a Popeyes for lunch. It was an interesting experience, as we were outside of any major city so everyone had a pretty thick accent. Joel got the shrimp, and Jeff had the chicken, which came with a mini 3.7mL bottle of Tabasco sauce. The food was surprisingly good, though neither of us are dying to go again, but it was nice to try. 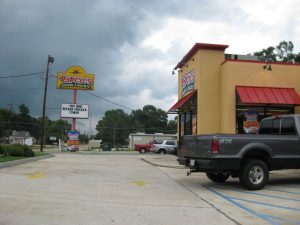 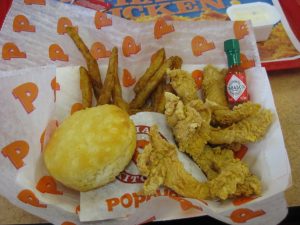 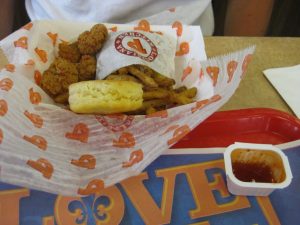 Continuing on our drive to New Orleans, with the rain still moderate, our driver’s side wiper blade fell off. We pulled over and popped it back on. Nothing seemed out of the ordinary. 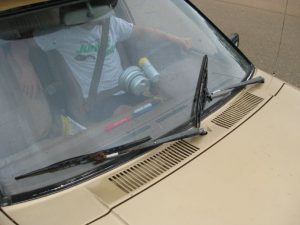 As the rain continued falling and we headed towards New Orleans the landscape drastically changed from walls of trees on either side of the road to swamp-like with a raised road and floating/stilted houses. The raised road continues for miles and miles towards New Orleans. It would have taken an effort or two to build that highway. 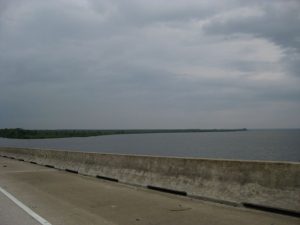 Once we got into New Orleans, we stopped at a McDonald’s to find a motel and supper. We found a restaurant that seemed decent and headed over that way to check it out. Upon reaching it, we found it closed, so we head down to Bourbon Street and walked around until we found this place and had some blackened catfish and crawfish. It was pretty good. 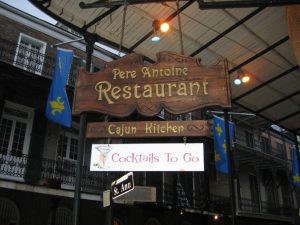 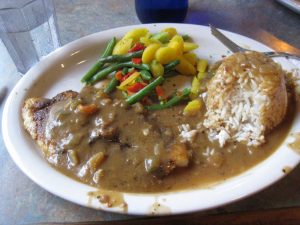 Bourbon Street wasn’t anything really special; it looked pretty neat, and there was a lot happening, but it mostly seems like somewhere people just go to get liquored up. We walked up and down it and then took a stroll back to our car. On the way back to the car, we stumbled upon a very stocked tiny book store. It was very full, with close shelves and a crazy system to where everything was. Joel bought a few books and we went to find a motel.
The goal for Day 10: Going to get an oil change at a Walmart or a Toyota dealership or somewhere. Then, we’ll be on our way to Houston and more BBQ. We figure once we’re in Texas, it will be more brisket country. Hopefully there are still a few ribs worth eating.