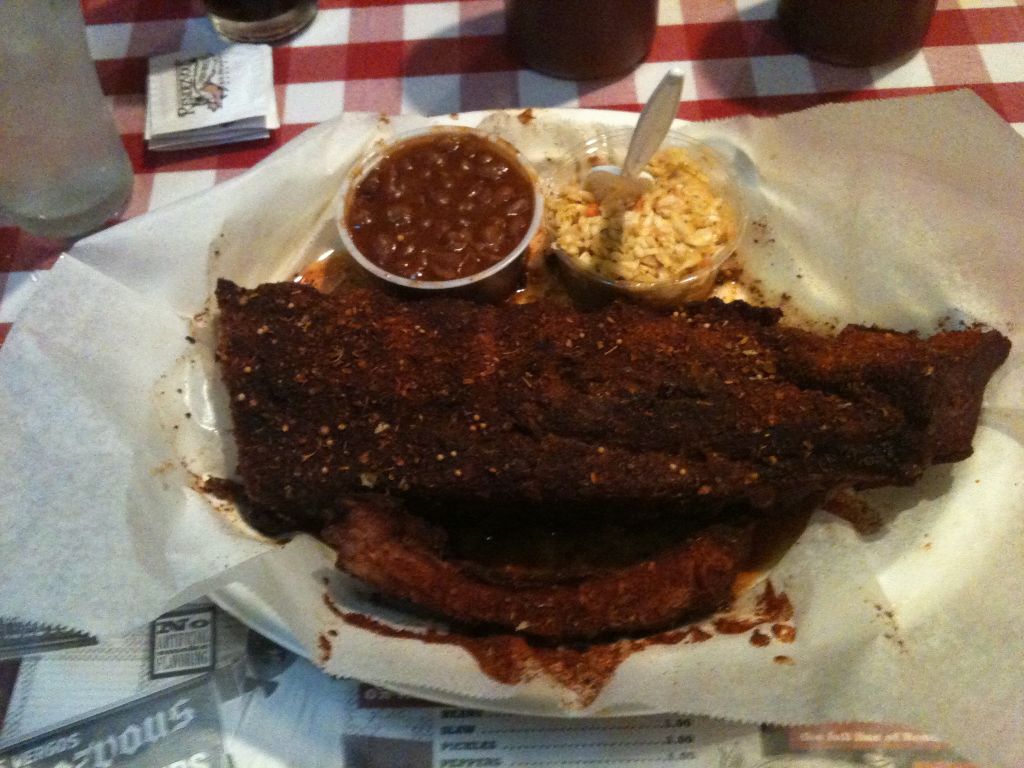 Destination: Memphis, TN
End of day Odometer Reading: 216,795km
After spending most of the morning in at the truck stop working on the blog/reading/watching TV, we headed into downtown Memphis to hit up Rendezvous for some BBQ for lunch. Rendezvous is well known for their charcoal ribs, which are not cooked low and slow like most BBQ places, but are done over charcoal. They were average to decent ribs in the general pantheon of ribs, but they are not really what we were looking for. When you drive as far as we have to get authentic BBQ, you want a good smoke ring and they’re not that. Their rub was decent as well, but didn’t knock our socks off. 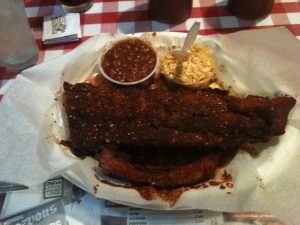 Rendezvous is situated in an alley in downtown Memphis, so it was unfortunately hard to find parking nearby, and we forgot to drive back to get a picture of the car outside. A disappointment, but so were their ribs, so that makes us square.
After we left Rendezvous, we decided we would check out some of the other activities we had checked out the day before when we stopped by the visitor’s centre. First we headed over to the brewery to see about going on a tour, unfortunately realizing they only run the tour at 1:00pm, and it was much later than that. We moved to the next item on our list, the Memphis Farmer’s Market. After driving around, and then walking around for a while, we realized it was already finished, so it wasn’t going to happen. Next item on the list was a military supply store just north of Memphis, so we drove out that way for a while. After driving past the place a couple of times, we realized it was there and drove into the parking lot. They were closed already. Feeling defeat, we stopped at a McDonald’s for a little while to sit in some glorious air conditioning and get something to drink. At some point Joel figured it would be a good idea to get a Happy Meal. The great things about Happy Meals in the USA, is that they actually come in the square red box that they show in the commercials. A true delight, plus you can get them with larger sandwiches, so Joel got a Double Cheeseburger Happy Meal. 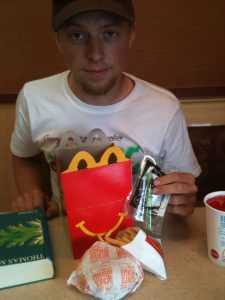 At some point during the afternoon we stopped at a Walmart Supercenter to get Jeff some sandals. Another $12.00 well spent.
After wasting a ton of time driving around to places we couldn’t do anything at, and getting a Happy Meal, it was time to get some more BBQ. The last place to visit during our time in Memphis was The BBQ Shop. Joel ordered a full order of half-wet/half-dry ribs and Jeff ordered a beef sandwich. The ribs were extremely well cooked, especially after the charcoal experience at Rendezvous earlier in the day. Their hot BBQ sauce was also probably the hottest we’ve had since going on this trip. The slaw was pretty decent as well, we think it had some pickles in there as well. The BBQ Shop probably had some of the best BBQ we had while in Memphis. 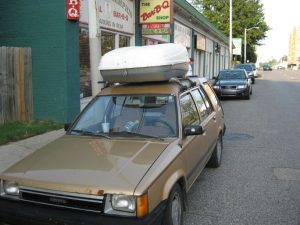 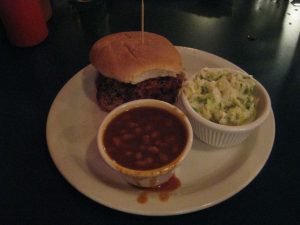 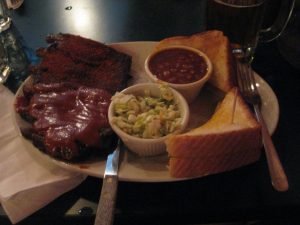 After eating at five BBQ restaurants in Memphis, and as many in Kansas City, I think it’s safe to say we prefer Kansas City-style BBQ to Memphis-style. Not much in Memphis really cleaned our clocks, though it was all pretty good. Kansas City had more great BBQ, while Memphis had pretty good BBQ, of course that being compared to what we had in Kansas City, not necessarily what we have had in Calgary.
The goal for Day 9: Leaving Memphis for New Orleans, LA. Not entirely sure what we’re going to do when we get there. Probably stop at a McDonald’s to assess the situation, we’ll see.