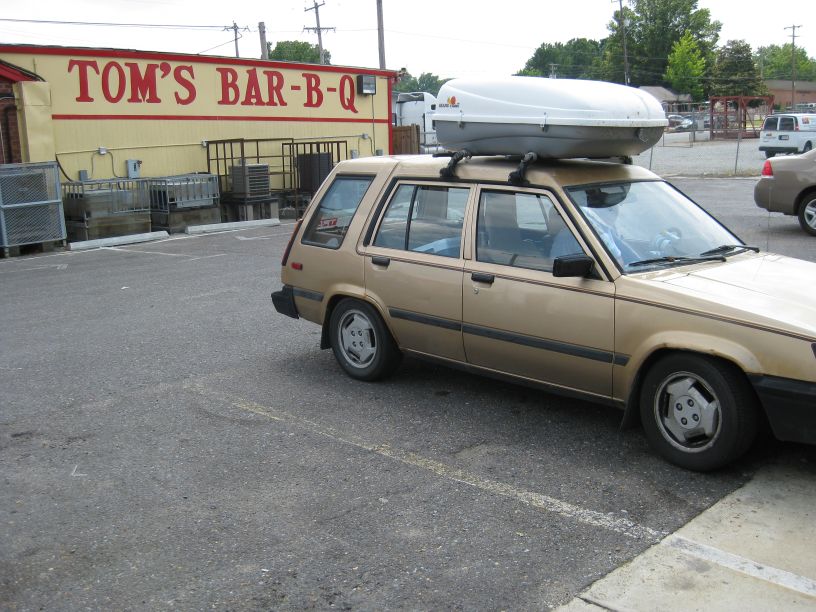 Destination: Memphis, TN
End of day Odometer Reading: 216,575km
Woke up a little later today, we had a few things we had to get done, but there was no rush. The first thing we did was head into downtown Memphis to the visitor’s centre. Found a few things that we can do while in town. Afterwards we went to Shangri-La records and Joel bought a stack of vinyl. They had a lot of good stuff, but a lot of it was priced quite high. Still a cool place. Afterwards we took a drive over to Tom’s BBQ for lunch.
We had arrived at Tom’s BBQ too late on Day 6, so we decided to go earlier today and get some lunch. Both of us ordered the regular pulled pork sandwich. It was a good size for lunch, both of us weren’t all that hungry at the time. It was pretty good pulled pork, however the pulled pork at Arthur Bryant’s in Kansas City has yet to be beaten. The fries were pretty good, but not out of this world. 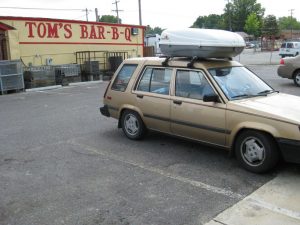 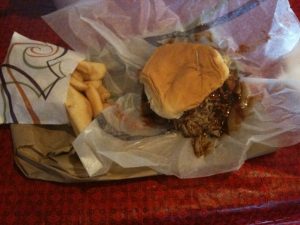 After lunch we drove over to Collierville to check out the Biblical Museum they have over there. It was unimpressive. It was a small collection of mostly replicas and photos of other biblical items from other collections. There were basically no explanations of any of the items, or their significance. They did have a display room with St. John’s Bible, which is very cool, but it didn’t make up for the rest of it. It is very clear we are in the Bible Belt though, even before we arrived in Memphis, there are churches and billboards all over the place; it’s different.
One of the things that is very noticeable, and has been in many places we visited, is the large distinction between poorer and nicer neighbourhoods. There are very clearly defined limits. You’ll drive to another area, and immediately you can tell it’s a nicer part of town. Jeff has been pointing out pretty much every Lexus he sees (naturally). Until driving to Collierville yesterday, there were a few here and there, but on the way there, I saw probably 8-9 LS430/460 models and many other Lexus’s as well. It was different.
Heading back into Memphis we went back to Corky’s to see if they had Joel’s hat from last night, he was pretty sure he had left it there. They found it and we hopped over to the McDonald’s next door to use their Wi-Fi and enjoy their fantastic air conditioning with a couple of beverages. After spending a couple of hours at McDonald’s, we drove over to Leonard’s Pit BBQ. 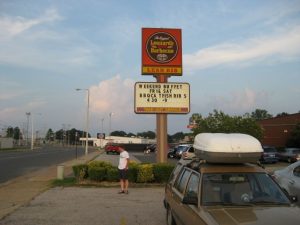 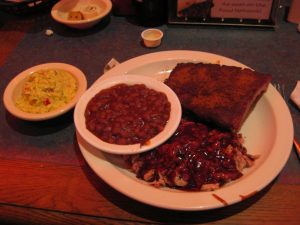 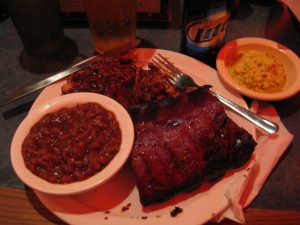 Jeff ordered the dry ribs and pulled pork, while Joel ordered the wet ribs and pulled pork. The ribs were cooked pretty well, but Corky’s dry ribs were superior to Leonard’s dry ribs. Nobody has touched Oklahoma Joe’s wet ribs yet. The pulled pork was pretty decent as well, but still not as good as Arthur Bryant’s. They had an odd style of coleslaw, it was very vinegary, and very finely chopped; didn’t really do it for us. Jack Stack’s coleslaw is still the pinnacle of slaws that we’ve eaten thus far. It was just so creamy and delicious, plus the celery seed didn’t hurt at all. Leonard’s BBQ started in 1922 on the corner of some street in a car, or something; so there was an old-school car parked in the dining area. It was kind of neat.
After we finished supper we headed over to Beale Street to see what was happening down there, we figured there might be some good Memphis Blues going on. There was a fair bit going on down there, but nothing really spectacular. The few bands that were playing outside or near outside were mostly just playing popular songs (not even really blues or jazz or anything). There was a place that were somewhat interested in checking out, however the cover charge kept us outside; probably for the best anyways because they left the stage relatively quickly afterwards anyways for a break. We played a few games of pool in one of the smaller places upstairs and ran into an older couple from Arkansas who had vacationed in Jasper/Banff/Calgary last year, so we talked with them for a while. Joel played a round with him, and won. We headed back to the truck stop afterwards and that was that.
The goal for Day 8: Last day in Memphis. Two more BBQ places to hit before we head to New Orleans and we’ll be getting something more Louisiana-ish to eat. We also hope to go on some sort of brewery tour and to find an army surplus store. After all that is done, we figure will fill some time with a little bit of bowling.
BONUS: Picture of Joel wearing Junior Mints shirt. 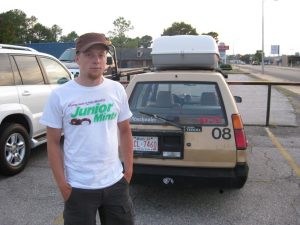