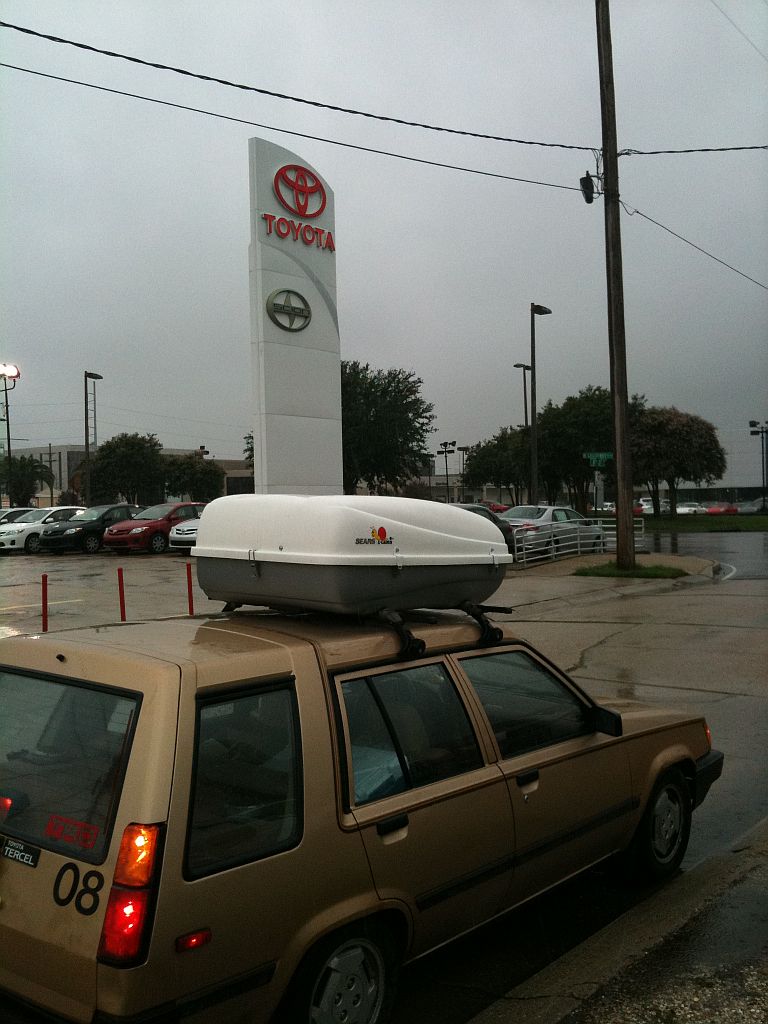 Destination: Luling, TX (Near San Antonio, TX, South of Austin, TX)
End of day Odometer Reading: 218,281km
We left the motel this morning at around 10:30 to get an oil change at a Toyota dealership in Metairie, LA (basically in New Orleans). Jeff had called the dealership to check on whether or not we could get the oil change done today, and they said sure, just come on in. When we drove into the service reception drive-through, one of the service advisors came out to greet us. After Joel rolled down his window, the advisor said, “Do you want to get this serviced here?” Joel replied, “No, we just need an oil change.” “I’ll be right back, we don’t normally work on cars over ten years old,” the advisor replied. We were aghast, (or at least Jeff was). Upon returning he informed us that they would do an oil change, but nothing else. That was fine by us, it was all we wanted in the first place anyways. After turning off the car, the advisor once again suggested we take the car somewhere else to get an oil change, saying that as it was from Canada it had a different VIN and his system wouldn’t take it, and so on. Jeff just told him that it would be fine, and we went inside to wait. 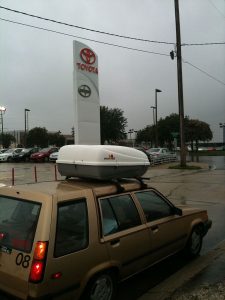 After paying, we were on our way to Houston, TX (our original planned stop for tonight). As it was going to be a relatively short driving day to get to Houston, we planned on taking a more scenic route off of the interstate to get there, however after some ridiculously crazy down pouring of rain and stopping for lunch at Chick-Fil-A, we checked into where to stop in Houston and discovered that the Texas BBQ Belt is actually further away from Houston than we thought. Ultimately we figured we would need to blast down the interstate as quickly as possible and get to Luling for some BBQ. 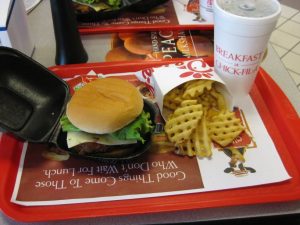 After getting hitting rush-hour in Houston, we ended up being very delayed on getting to Luling. Ultimately by the time we arrived in the small town, most places were already closed, including our planned BBQ stop. All along the interstate for over 100 miles (since before Houston), there were billboards for a place called Buc-ee’s. Advertising things like the world’s creamiest root beer, as well as other such products, we decided to take a drive over that way. It is a very interesting store; part restaurant, part gas station. They are filled with all sorts of stuff, it’s pretty neat. We both ordered a sliced BBQ meat sandwich, and had a few of their (admittedly very creamy) root beers. The meat wasn’t fantastic, but I reckon better than most BBQ-meat sandwiches you’ll get from essentially a (albeit absolutely huge) gas station. 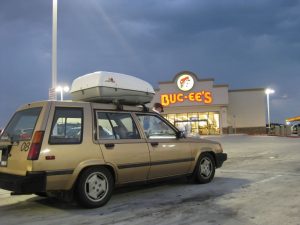 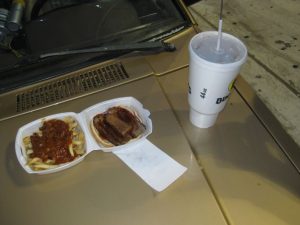 We’ve stopped at another truck stop for tonight, it seems like it’s going to be another hot one. Oh joy.
The goal for Day 11: Eat some BBQ for lunch in Luling, TX before heading north towards Dublin, TX. Dublin has (basically) the original Dr Pepper bottling plant, and still uses real sugar instead of high-fructose corn syrup. It should be delightful! Tomorrow night we will be in Ft. Worth, TX. At some point we’ll need to get a new cord for Jeff’s iPhone, as he left it in the motel room when we left New Orleans, LA.