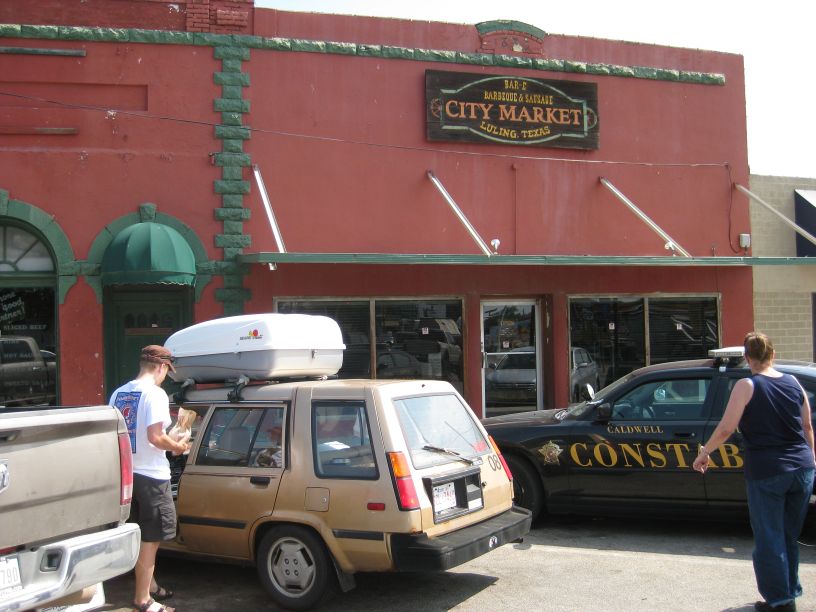 End of day Odometer Reading: 219,324km
We started the day off in Luling, TX; woke up around 10:00 or so and headed over to City Market for some early lunch. It’s an interesting place, you go in the front and walk to the smoke room in the back which has its own doors. You walk through the entrance door into a heat-box with a bunch of guys slaving over several large smokers. Greeted by a large white man, you tell him how much weight of each type of meat you want. We ordered a half pound of ribs and a half pound of brisket, plus a sausage link. After paying you leave the smoke room with your meat on a few sheets of butcher paper. After finding a table you head up to the front to get whatever else you want like a few Dr Peppers and some BBQ sauce. The ribs were quite delicious and the brisket was pretty decent. The sausage was interesting in that it didn’t seem to really have any filler, just meat in a casing. After finishing our pile of meat we went back and picked up another half a pound of ribs. They’re mostly bone anyways, haha. 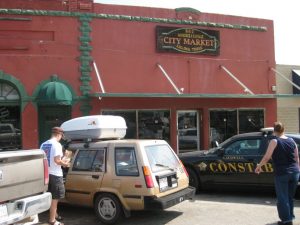 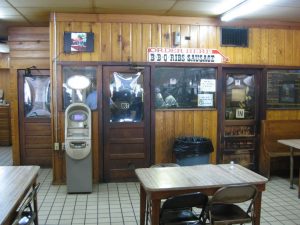 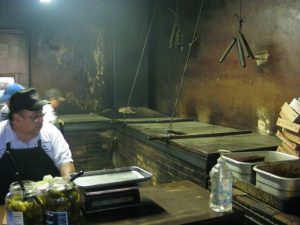 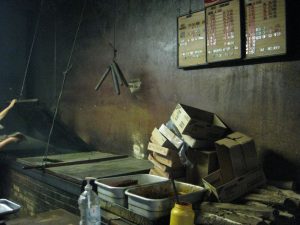 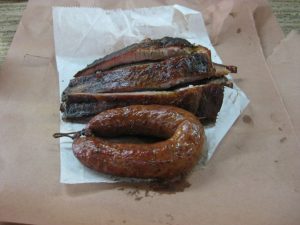 After Joel bought some of their BBQ sauce (which came in a little styrofoam cup – we’ll see how that keeps), we headed north towards Austin. On the way we saw a few signs for a place called Black’s BBQ. Joel had a hankering for some ribs, so we stopped off and, 20 minutes after eating ribs, brisket and sausage, Joel ate another half-pound of ribs. 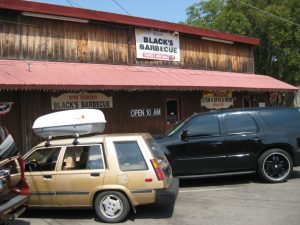 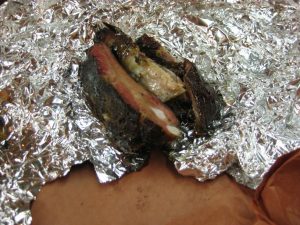 We drove onwards towards Dublin, TX. As we were stopping for gas a few miles away from Dublin, we noticed that the gas station was stocked up on Dublin Dr Pepper in glass bottles. We had entered Dr Pepper County! For those not in the know, after Dr Pepper was invented, the first bottling company for it was opened in Dublin, TX in 1891. They have been there for over 120 years and still bottle it using the original recipe including the use of pure cane sugar for sweetening. The rest of the Dr Pepper bottling plants switched to using high-fructose corn syrup in 1975, a move that Coca-Cola and others did around the same time or in the mid-80’s. Some of you may remember the “New Coke,” which was when Coke changed over to HFCS. After bringing back Coca-Cola Classic, the new sweetener remained as HFCS and they never went back to real sugar. In countries outside of Canada and the USA, New Coke was never introduced and so they went on (and still do) using real sugar to sweeten their Coke. This is true of Mexico, and actually some of eastern-Canada as well. 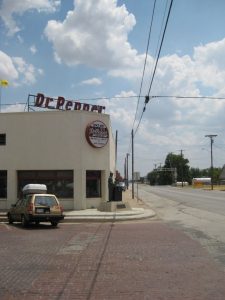 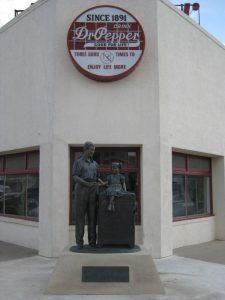 At Dublin Dr Pepper, they have a soda bar where we ordered a couple of Dr Pepper floats. They pour the syrup into the cup first, then the carbonated water, mix it, then throw in some quality ice cream and top it off with a bit more syrup. It’s incredibly delicious. After that we took a tour of the bottling plant. At the original plant they only run one bottling run per month, refilling used glass bottles (10 fl. oz.), they have another off-site location where they do the other glass bottles and cans, etc. They gave us an icy-cold 8 fl. oz. glass bottle to drink while on the tour. It was delicious, so we decided to grab a few of them to take with us. 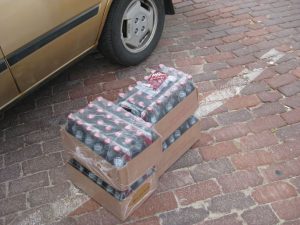 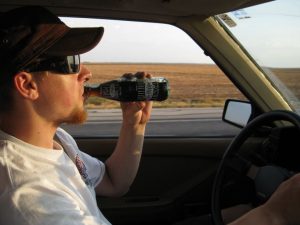 We decided that there was no need to go to Ft. Worth, TX, as we’d just end up going further tomorrow, so we headed up to Abeline, TX with the intention of staying there for the night. After sitting in their McDonald’s for a while, we figured we might as well push onwards and see when we felt like stopping. If we can shave an extra day off of our schedule we can spend another day somewhere interesting later. We ended up driving all the way to Roswell, NM. We now have an extra day to play with. Might do that again, we’ll see. 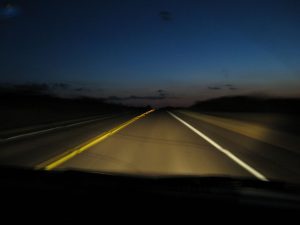 The goal for Day 12: Drive along some secondary highways to Springerville, AZ. We might go a bit further towards the Grand Canyon, but we’re not 100% sure on that yet.