Skip to content
Destination: Kansas City, MO
End of day Odometer Reading: 215,330km
Having determined that the muffler (which had only been holding on with some almost rusted-through piping) had broken off of the exhaust pipe on Day 3, we decided to stop in at an Autozone and buy some sort of repair kit. After buying a kit that included some aluminized metal, hose clamps and muffler tape, along with some sheet metal snips and a small piece of 1.75” to 2” pipe we jacked up the car and “fixed” it. 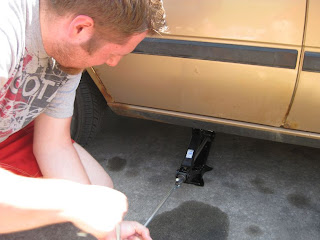 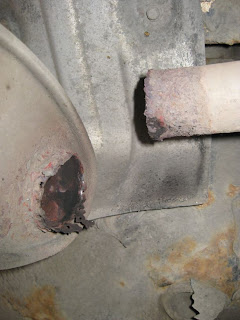 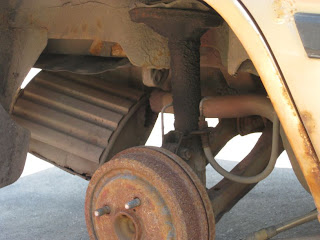 It seems to be holding up relatively well, it was very quiet at first, but that tape can only hold on to that rust for so long. The piece of pipe I put in there is jammed into the muffler though, so most of the exhaust is getting directed that way eve if it’s not actually attached to it. We have enough sheet metal to do this repair 3 times, so hopefully that’s enough. We may need to get some more muffler tape though. 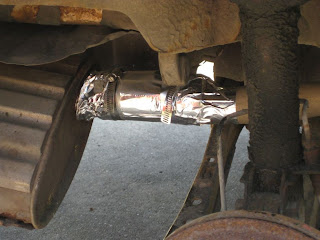 After we took care of the car, we headed downtown to the Kansas City visitor’s centre to find out what kind of free activities there were to do in KC. The visitors centre office is on the 22nd floor of a downtown office building. It’s quite out of the way, but they did have some information for us, including a free map of the KC area. We found out that the Harley Davidson factory here in KC does free tours during weekdays, so we plan on doing that tomorrow. The tour requires shoes however, which meant that Joel needed to buy a pair, since he only brought sandals with him. A trip to the local Walmart Supercentre was in order. There we found a pair of $12.00 shoes which we fully intend to return tomorrow after going on the tour. 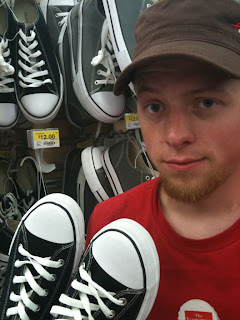 While we were in the downtown area we found that Jack Stack’s BBQ was only about 15 blocks away from the building we were at, so we decided to walk over there for lunch. It was a hot walk over, and on the way back we realized there was nobody else walking, anywhere. We looked around in every direction and we were the only people outside, except for a couple of people waiting for a bus. Were we the crazy ones, or are they? Who knows, but it was very hot. The BBQ at Jack Stack’s was amazing. Their cole slaw is probably one of the best we’ve ever eaten and the BBQ was also very delicious. The sauce is a lot more savoury than Gate’s, and considerably less tangy. Their beans were also very good. Something that we’ve seen on a few menus around Kansas City is called “cheesy corn” which is like Mac & Cheese, but without the mac; substitute the noodles for corn. It’s interesting, though it didn’t really do it for me. 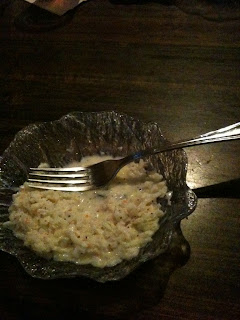 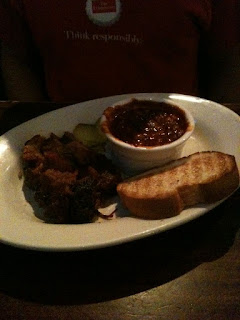 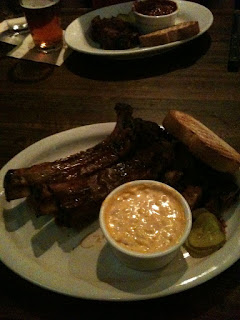 After lunch we headed over to a Toyota dealer in Mission and ordered a radiator cap for the Tercel. It wasn’t badly priced, but they didn’t keep it in stock, so we’ll need to pick it up on Wednesday after they get it from the warehouse. After ordering the radiator cap we headed over to a bowling alley to throw some rocks. It was considerably less expensive than in Canada, and since 5-pin bowling is an exclusively Canadian game, all of the bowling alleys down here are 10-pin, which is a true delight. We will probably waste some more time at bowling alleys when we have down time. It’s air conditioned and relatively cheap, so it’s not a bad activity at all. We both suck, though Joel won all 3 games we played. 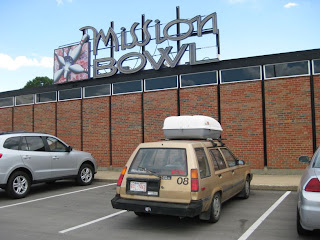 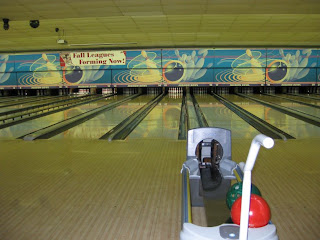 After bowling we were in the mood for some more barbeque, so we headed over to Arthur Bryant’s BBQ in downtown KC (just about 3-4 blocks south of the Gate’s BBQ location we ate at when first driving into town). Joel ordered the long ribs and Jeff ordered the pulled pork. Both were very amazing, but you can get a true feeling of the awesome with the ribs because you can try all 3 of their wonderful sauces (Rich Heat and Sweet Heat are particularly amazing) on them. Joel bought a bottle of the Rich Heat, though we have a feeling we’ll stop in tomorrow and buy another bottle of the Sweet Heat as well. Might even get another set of ribs while we’re there. So delicious. 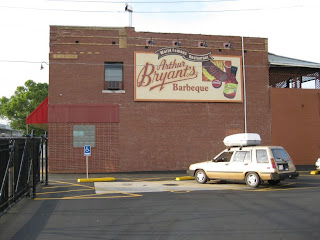 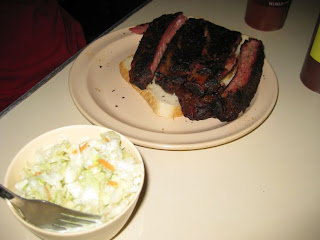 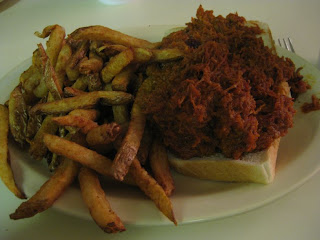 The goal for Day 5: Stay one last day in Kansas City, MO and visit the last 2 BBQ restaurants we have on our list. We will also need to pick up the radiator cap from Toyota and we plan on visiting the Harley Davidson factory in the morning. Hopefully the shoes Joel bought for $12.00 aren’t too scuffed up, as we plan on trying to return them.