Skip to content
Destination: Kansas City, MO
End of day Odometer Reading: 215,189km
Waking up at the truck stop outside of Denver, 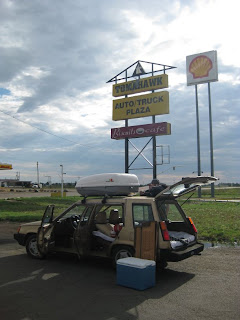 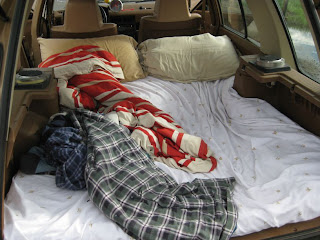 we decided that it wasn’t really worth the extra time to head back into Denver to eat at Steuben’s, so we had breakfast at the truck stop restaurant instead. Despite horrid service, the food was quite well made. Joel had bacon and eggs, Jeff had a Denver Skillet. 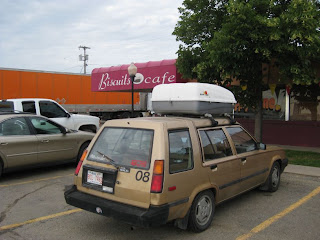 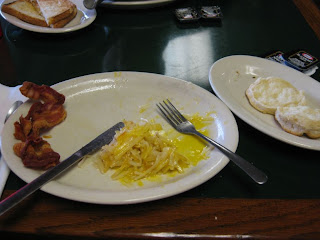 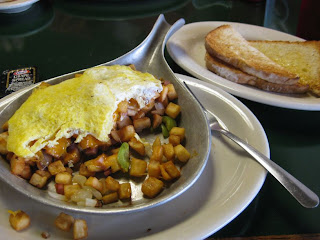 Joel did all of the driving on Day 3, while Jeff spent the day dazing in and out of consciousness sitting in the 40-degree heat. We filled our water bottles completely with ice, which promptly melted without much regard for our needs. The Tercel seems to handle the heat relatively well, however pushing it up hills does cause the water temperature gauge to rise. It doesn’t overheat, and it comes back down quite quickly after the load on the engine drops off. We are going to stop in at a Toyota dealer in the next couple of days to get a spare radiator cap to have just in case we have any issues. We have 2 jugs of premixed coolant in case we need to top it off or something in the desert. Also the car seems to be louder than it was before, probably something muffler-related, we will need to check into that tomorrow.
At one of our stops for gas, Joel found a couple of bottles of Sioux City Sarsaparilla, which were delicious. After that it was time to get a move on, as we were driving slightly slower to make sure the engine didn’t heat up too much, so we needed to keep pit stops short. We had to get to Kansas City in time to eat our first meal of authentic barbeque. 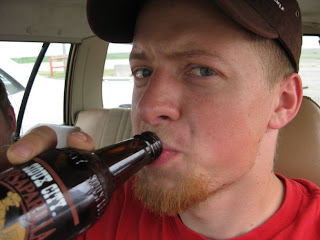 Continuing on the I-70 to Kansas City, we drove through the city to get to the first real meal of the trip, at Gate’s & Son’s BBQ. The meat was delicious, though it was a different style of restaurant than most that I am used to. The people who work there have a very strict script they follow, which always starts with “Hi, may I help you?” This was repeated often and loudly, even if nobody needed to be helped at the moment. After getting the food, you move past the BBQ sauce station where they have variations of their original BBQ sauce. It’s quite delicious, but can be a bit too much after a lot to eat. It’s very intense and quite tangy. We hope that some of the other places we eat will have a more subtle sauce that doesn’t quite knock your socks off as much. 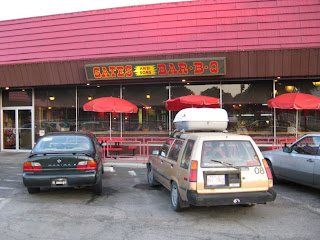 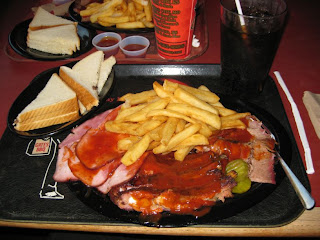 A large portion of Kansas City seems to be a bit run-down and a little bit on the poorer side, but it does depend on where you go/stay. We stayed the night in the car again at a Flying J’s truck stop on the north end of town. It’s a decent place, however it is HOT in Kansas City, even at night. Falling asleep proved to be quite the challenge, we ended up staying in the truck stop until after 2:00am playing cards so the temperature would drop to remotely reasonable for us Canucks.

The goal for Day 4: Stay in Kansas City, MO and eat even more authentic BBQ! We will probably stop at Toyota to see if we can get a radiator cap, and see if we can fix whatever is wrong with the exhaust on the car. It’s very loud. At some point in the next few days we’re going to try to find a bowling alley. Mark it, dude.