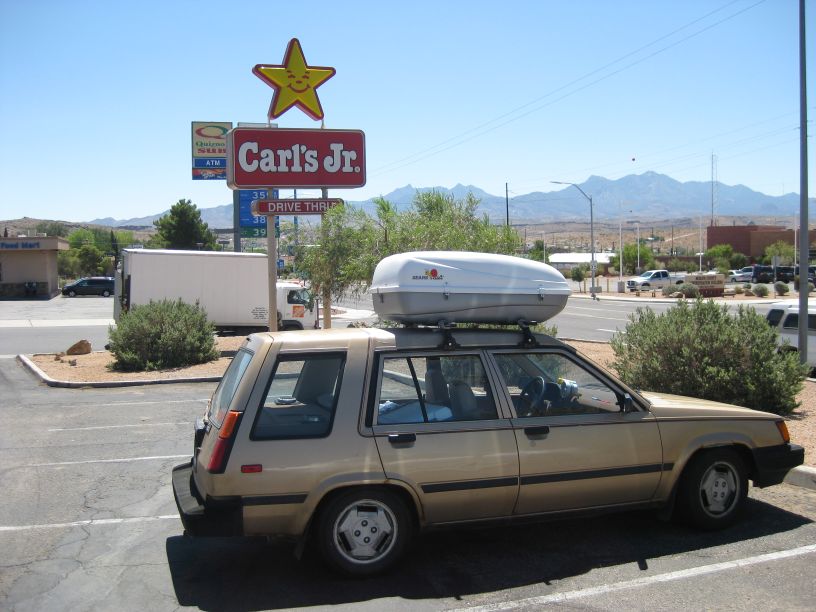 Destination: Las Vegas, NV
End of day Odometer Reading: 220,855km
We left Ash Fork, AZ on our way to Las Vegas, NV around 10:00am. We figured we’d get to Las Vegas around lunch time and then check in at the hotel before doing some other stuff around Vegas. On the way we drove over the huge new bridge that runs over top of the Hoover Dam, as well as drove down and drove over top of the Hoover Dam as well. It’s pretty big and cool, though the way they built it and what they had to do is much more interesting than the dam itself, which is now just one big tourist stop.
Originally having planned to eat at In-N-Out Burger when we got to Vegas, we saw a Carl’s Jr. along the way and stopped there for lunch instead. We both got the Six-Dollar Burger, though Joel got the Western version and Jeff got the Original. It’s a pretty decently sized burger, though with the size of the box it comes in, you’d think it would be slightly bigger. The meat tasted pretty good and the toppings were pretty fresh. 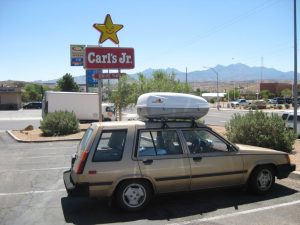 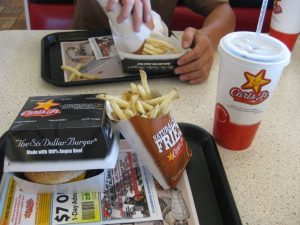 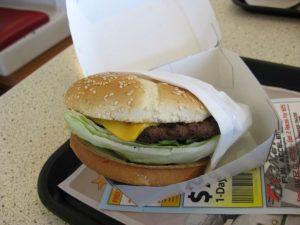 After lunch we drove through Boulder City on the way to Las Vegas, we stopped in at THEhotel at Mandalay Bay around 2:00 and checked in, though we had to wait for our room to be ready, so we stopped for a couple of beers and then headed over to the Shark Reef. They had sharks as advertised. After sitting in the room for a while, we headed over to the buffet. It wasn’t their best showing, a lot of the food seemed overcooked and for the $28.00 we spent on it, we probably could have gone to one of the other nicer restaurants that are all over Vegas. Still, it was a buffet, which is I guess something you should do when you’re in Vegas. It’s pretty hard to photograph it though, so unfortunately there are no shots of the food.
Trying to decide what to do after supper, we ended up deciding to go see “Tree of Life” at a local theatre instead of heading down to Fremont Street. The movie was recommended by various people including a friend who has similar tastes. It was a pretty good show. After the movie we headed back to the hotel and went to bed. It was nice not sleeping outside in the Vegas heat, though it was actually a lot cooler than we expected it to be. Still, the A/C was nice, and the hotel had very nice rooms, even though our bathroom was a little out of sorts.
The goal for Day 15: Make our way to San Francisco, CA, where we will be for a couple of days. We plan to stop off at a pipe tabacco shop while there as well as visit some other local places. Should be fun, we will be driving through Death Valley National Park and Yosemite National Park on the way to San Francisco.